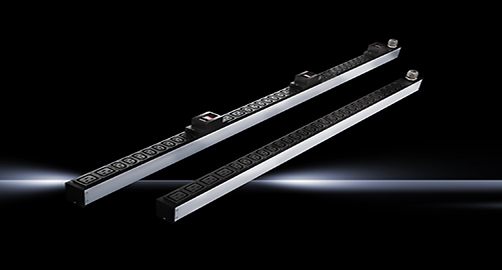 Rittal has developed four compact PDU (Power Distribution Units) systems for professional power distribution in IT racks which will halve the time a system takes to assemble compared to screw in PDUs.

The system employs snap-in technology so not only is it very quick and easy to assemble, there is also no need for tools. Up to four PDUs can be mounted in the zero-U-space, (the space between the side of the 19-inch level and the side panel of an 800-mm wide IT rack) so no height units for servers are wasted. Options include:

The “PDU basic” which provides a robust and compact basis power distribution for the IT environment. The insert strip is easily connected and is immediately functional.

The “PDU metered” variant has an internal web interface and an ethernet port so performance data on an entire IT rack can be cost-effectively monitored.

The “PDU switched” model builds on this functionality, allowing the user to turn individual output slots on and off via the web interface.

Finally, the “PDU managed” version takes this one step further. It has been developed specifically for use in high-end IT racks and offers power distribution with power measuring and monitoring functions for each individual output slot.

Low internal power consumption All the PDUs feature the standard international data centre CEE connectors with a three-metre long connec-tion cable and C13 and C19 slots. A country-specific variant is also available for the UK market.

They are available in single-phase or three-phase versions; phase currents of 16 A and 32 A can be supported, depending on the type of PDU, which means electrical outputs of over 22 kW can be distributed by one rack PDU.

Again, depending on the model involved, they also enable energy management by phase (feed) or even down to server-level (single energy measurement per output slot). All have a low internal energy consumption due to integrated bi-stable relays (in the switchable versions), as well as an energy-efficient OLED display with a power-save feature.

All measurements such as voltage, phase and neutral currents, as well as active and apparent power, active energy and power factor are displayed on a web page. Suitable alarm limits can be clearly defined so that the administrator can react quickly in an emergency.

The Computer Multi Control (CMC) III monitoring platform, with its own CAN-bus function and (optionally) up to four sensors, can also be connected up to monitor temperature, humidity, and access. The sophisticated user administration system protects the power distribution from unauthorized access.