During the French Revolution, beheading was the preferred method of execution. The guillotine was used for thousands of executions, meaning there was no shortage of experimental material for biologist Marie Francois Bichat. Bichat tested the electrical stimulation of hearts, which was instrumental in the development of the modern day pacemaker. Nowadays, pacemakers are commonly used to maintain a regular heart rate. Here, Keith Armstrong, worldwide electromagnetic compatibility (EMC) expert at EMC Standards, looks at how electrical interference can cause pacemaker issues.

The rise of mobile

Even everyday technology can have a dangerous effect on pacemakers and other implanted medical devices. Research has indicated that interference may be caused by holding a mobile phone within 150mm of the implanted device, or with direct contact between the phone antenna and the user’s skin.

Interference can occur with the phone in standby mode, as well as during use. Many phones have magnets in their loudspeakers, which might cause the pacemaker to go into ‘magnet mode’ when in close contact, a setting that forces the pacemaker to run at a fixed pace. 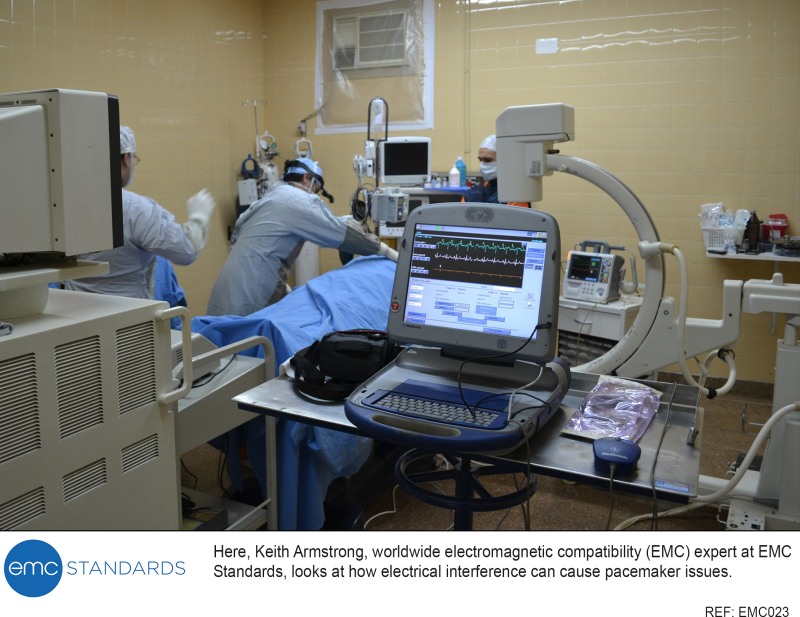 Based on the most recent testing, simply moving the phone away from the implanted device will remove the interference. Many medical safety bodies recommend that users of implanted pacemakers or defibrillators do not keep their cellphone in a pocket over their implant; and when using the phone, hold it to the ear that is furthest away from the implant and do not allow the phone antenna to touch any part of the body.

The dangers of shopping

While many people think the only damage a shop can do is to their credit card, shops can be hazardous places for those with implanted devices. Anti-theft scanners found at the exits of shops emit strong electromagnetic fields. Shops place small labels on items they want to protect, which contain circuits that resonate at the appropriate frequencies and disturb the field produced by the scanners, allowing their detection.

Despite numerous improvements in pacemaker design, the development of new technology could lead to further problems with electrical interference. Radio-frequency identification (RFID) tags are increasingly used in a variety of applications. They can be used to track goods, animals, baggage or to unlock hotel doors. Despite the utility of these devices, they can have a dangerous effect on implanted devices.

In 2010, Jeff Silberberg reported some shocking reports to the 20th Annual AAMI/FDA International Conference on Medical Device Standards and Regulation. At least one reaction to RFID tags was observed in 21 of the 22 pacemakers tested. While being exposed to each of the two 134 kHz RFID readers, a pacemaker reaction was observed for 34 of the 44 possible tests (77 per cent).

The same story is true for implantable cardioverter defibrillators (ICDs), devices used to restart the heart with electrical pulses. At least one reaction was observed in 18 of the 19 ICDs that were tested for interference from RFID. While being exposed to the two 134 kHz RFID readers an ICD reaction was observed for 27 of the 38 possible tests (71 per cent).  Subsequent work has resulted in a new test method for the immunity of medical devices to RFID technologies: “Medical Electrical Equipment and System Electromagnetic Immunity Test for Exposure to Radio Frequency Identification Readers” which was published on the 29th September 2016.

In the development of everyday technology, it is vital that manufacturers consider EMI at the start of their design process to avoid interference with other electronic devices. At least today’s design engineers can carry out their experiments using computerised design simulators rather than on beheaded members of the former French aristocracy.