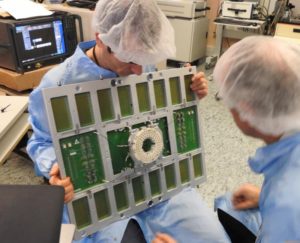 Presto Engineering has been selected as a finalist in the Design Team of the Year category at this year’s Elektra Awards. The winners will be announced at the Awards ceremony that will be held in London on the 5th of December 2018.

The Elektra Awards are described by the organisers as being the high point of the year for the global electronics industry. Established as the best promotional platform to celebrate the achievements of individuals and companies across the globe, they present best-practice in key areas including, innovation, sales growth and employee motivation.

Presto’s entry focussed on the work of its Design Team that devises novel and innovative ways to extend the test capabilities of standard testers. Martin Kingdon, Presto’s VP of Sales, explained: “Customers often come to us to solve their testing challenges. Frequently, the issue is that they are pushing the boundary of technology with their innovative chips. This means that the manufacturers of semiconductor test equipment have not yet created testers or, if they have, the testers are very expensive and specialised, as the need has not reached mainstream demand.”

In most cases, Presto’s Design Team creates a hardware solution that is built into the load board so that a standard tester could be used rather than having to buy and charge the customer for a highly specialised tester. Test costs are based on the time that a tester is used so that the small additional costs of components on a load board is significantly more cost effective than moving to a higher feature or specialised tester.

Cédric Mayor, Presto’s COO, added: “We are delighted that the outstanding work of our Design Team has been recognised by the judges in selecting them as finalists. Their creative design work saves customers money by adapting and enhancing existing testers to meet new, more challenging test parameters rather than incurring the cost of highly expensive, specialised test equipment. Sometimes, such as for optical and millimeter wave testing, we are well ahead of the ATE vendors with working solutions while they are still designing their versions.”