Pressure on businesses for power redundancy

Power distribution specialist ide Systems is calling for businesses to reconsider their electrical infrastructure to ensure reliable power in the event of failure. The call comes after a critical power failure at a British Airways’ (BA) data centre resulted in at least 75,000 passengers being grounded and cost the business an estimated £150million.

The critical power failure at BA was reportedly caused by a contractor disconnecting the wrong power supply at a data centre near London’s Heathrow airport. It is believed that when the power supply was reconnected it resulted in a power surge that brought down the data centre’s uninterruptible power supply (UPS) and backup power system. 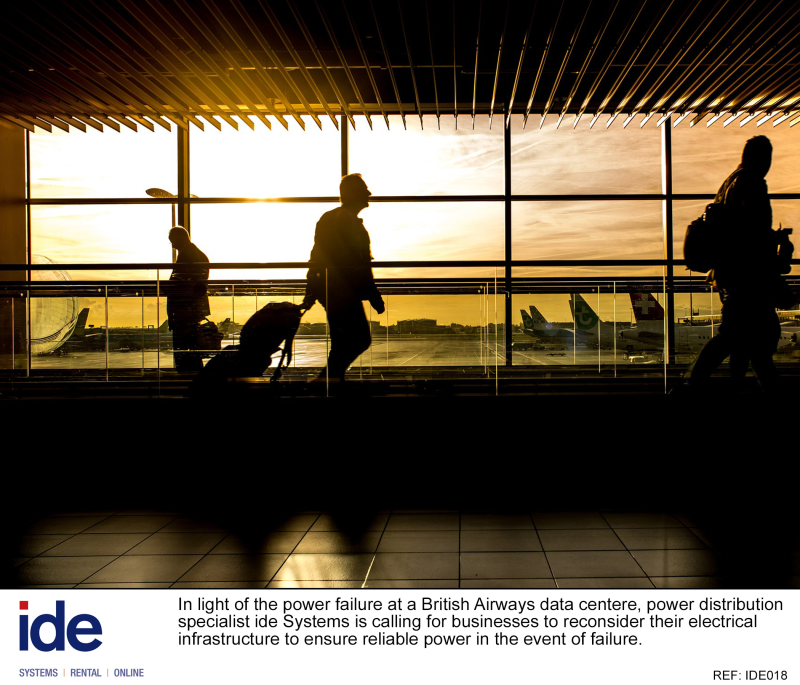 While the outage itself lasted for only 15 minutes, BA was forced to cancel 479 flights on May 27 due to the impact the suspected power surge had on its IT systems. More than 200 services were subsequently cancelled in the following two days.

As IT systems and data centres become central to the daily operation of businesses, it is becoming increasingly important that companies have effective electrical infrastructure in place to safeguard against such outages.

“While many initially speculated that it was the result of a cyber attack, the BA incident does underline the important issue of electrical redundancy equipment,” explained Matt Collins, business development manager of ide Systems. “The digitalisation of business has led to IT infrastructure and data access becoming critical to success, yet many businesses prioritise cybersecurity measures over physical redundancies.

“Facilities managers must ensure that their company has the appropriate power supply redundancy equipment, such as automatic transfer switches (ATS) and automatic mains failure (AMF) panels, to prevent power outages of critical systems. These are designed to facilitate a power supply shift from mains electricity to a backup generator without disruption to service.

“For example, if there were a fault with the mains power supply, an AMF panel would signal that a secondary power source is required and would automatically switch the equipment to the backup supply. This would allow systems to stay online, delivering continuity of service and preventing the downtime associated with a manual switch.”

Facilities managers interested in learning more about how businesses can keep critical systems safe from unexpected power failure can contact ide Systems on 01543 574 111 or via the company’s website.