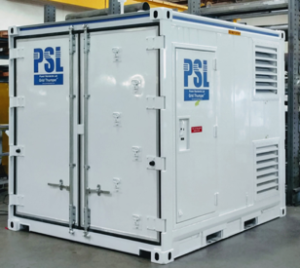 Grid Thumper rigorously tests complete, connected systems, including active distribution grids, detecting harmful instabilities that would otherwise be invisible. It uses patent-pending technology to briefly connect large, time-synchronised resistive and reactive loads – up to a megawatt, often for a tiny fraction of a second – then ultra-precise PSL PQube 3 and microPMU sensors record the grid’s system response.

Grid operators, data centres, hospitals, military bases, sports and entertainment venues, can all gain peace of mind that their critical power systems will perform as expected when needed most.

“Our company designs and integrates fail-safe power solutions for the defense and broadcast industries,” said Bill Wenzlau, CEO of Wenzlau Engineering. “With Grid Thumper, we are able to test sophisticated power scenarios to validate system reliability and availability. We can now provide the military with objective evidence that tactical radars will identify threats, and assure national television networks that major sporting events will remain on-air. Through our partnership with PSL, Wenzlau Engineering and our customers operate with a heightened sense of confidence.”

Researchers at U.S. National Labs have already shown interest in using Grid Thumper to examine PV system stability and detect sophisticated grid cyberattacks. Military suppliers, hospitals and data centres will rely on the non-disruptive Grid Thumper stability tests on mission-critical live grids. Utilities are discussing how to use Grid Thumper to map out distribution grids, and even to increase the amount of Distributed Energy Resources (DERs), such as solar PV, that is permitted on a given distribution line. Operators of island grids have plans to use Grid Thumper to measure actual control loop response and damping in a large population of installed inverters.

“It’s difficult to characterise in steady-state, so let’s perturb and observe. For the semiconductor industry, PSL has a long history of precisely disturbing power, then using it to test high-value sensitive loads,” said Mario Barbaresso, president and CEO of Power Survey, parent company of Power Standards Lab. “At last, with Grid Thumper, the power industry can also take advantage of this approach. Information from non-disruptive intentional disturbances, measured with our ultra-precise instruments, will improve grid stability.”