Power quality in the medical sector

You may have seen a lot more people checking in at A&E or taking selfies from their hospital bed recently. It’s not that all your Facebook friends have suddenly been under the weather, it’s just that hospital patients and visitors are now allowed to use mobile phones on site without fear of interfering with medical equipment. However, hospitals still have a long way to go to reduce power quality issues. Steve Hughes, managing director of power quality specialist REO UK, explains.

Power quality problems can be just as severe in medical environments as they are in industrial ones. For example, MRI scanners emit large amounts of electromagnetic radiation, so care must be taken around them. Patients must remove jewellery before entering the scanner and hospitals must use radiofrequency (RF) shielding to prevent electromagnetic radiation from causing interference in nearby medical devices. 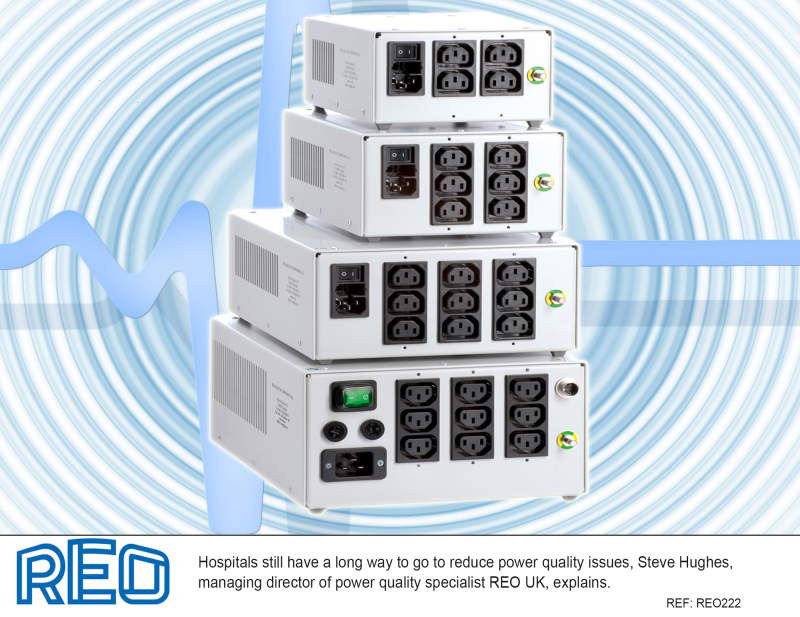 The rise in portable and handheld devices used to monitor patient vitals increases the number of devices in hospitals and, with more devices used, the risk of electrical interference rises. Such devices are susceptible to changes in power quality, which affects the quality of data received.

Electromagnetic interference (EMI) causes surges and spikes in power, which has an impact on both the data collected by medical equipment and the way devices interact with each other. If decisions are being made on the basis of potentially incorrect data given by the equipment, this could prove dangerous for the patient.

To protect patients, hospital managers must consider all of the equipment used in their hospitals as a whole, rather than only focusing on the interference caused by powerful medical equipment. Fortunately, facilities managers can use medical isolation transformers (MITs), such as the REOMED range, to allow most Class I equipment to pass the electrical side of the EN60601 standard and become safe for use in hospitals.

The transformers allow safe galvanic separation between the primary and secondary electrical circuits, which limits the electrical leakage and, as such, the interference to other devices. This means that COTS equipment, as well as portable and handheld devices, can be used in hospitals alongside medical equipment without compromising patient safety.

Thanks to increased EMI awareness and protection, we can now use our mobile phones around medical equipment. As useful as the public may find it to keep up to date on social networks, facilities managers have a bigger task ahead. To minimise equipment failures and increase patient safety, hospitals must take steps to reduce electrical interference from all medical and non-medical equipment used on their wards.