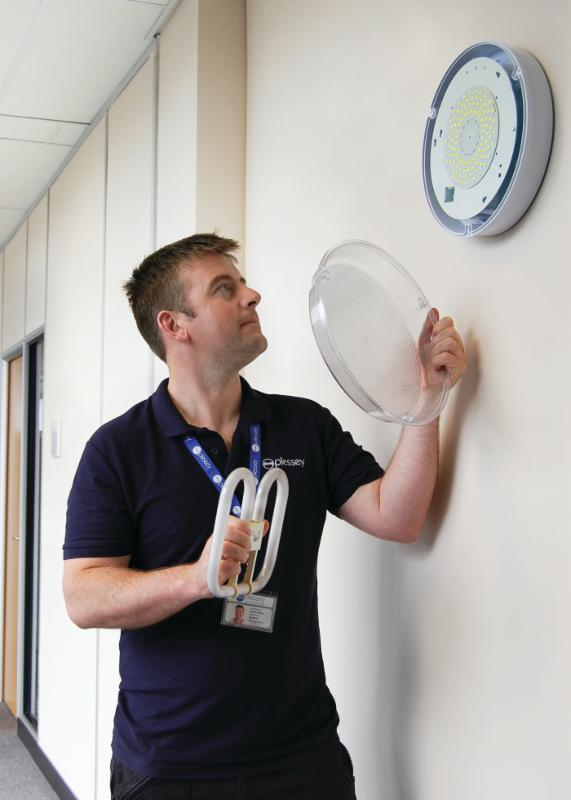 Plessey has announced that it is retrofitting its manufacturing facility with LED modules designed using the company”s GaN-on-Silicon MaGIC LEDs. The retrofit involves replacing aging fluorescent tubes and compact fluorescent bulbs in existing fixtures to use new LED light modules produced in the same facility in Plymouth, Devon, UK.

Lighting solutions using LED technology are more than 50% more efficient that their fluorescent and compact fluorescent (CFL) counterparts. LED lights can be dimmed, have higher quality colour control and do not use highly toxic mercury. LED lights also have much longer working life expectancy than any other forms of artificial lighting, lasting up to 100,000 hours compared with 10,000 hours for fluorescent tubes and 1,000 hours for tungsten filament light bulbs.

Strategies Unlimited’s new 2015 report projects a global LED-retrofit-lamp market that exceeds $3.7bn by 2016. The growth in solid-state lighting (SSL) products intended for existing sockets is from a $2.2bn base in 2011, and the report projects an annual 30% growth in the number of units sold.

Mike Snaith, Plessey’s operation director, said, “With recent process enhancements, our LED modules create efficiencies well above existing lighting technologies. We have not only developed an efficient fixture, but have developed cost effective ways to implement the retrofits which is key in the return-on-investment calculation. Generally, all lamps onsite are replaced annually. Fluorescent lamps, due their mercury content, cannot just be thrown in the bin and have to be processed by a special waste facility. Therefore, they also present a toxic hazard when carrying out maintenance should a lamp break.”

Predominantly illuminated by conventional fluorescent technology, the facility has three main types of fixture the Batten, the Pod style downlight and the reflector style ceiling troffer. It also has a selection of HID lighting in the form of High Bay and Low Bay fixtures.

Thomas Abbott, Plessey’s senior facilities engineer, said, “The LED retrofit kits offer the facilities engineers and installation contractors a cost effective, quick and easy method to take advantage of the new technology. Another benefit is the dramatically reduced power consumption. It only takes between 5-10 minutes to retrofit a fixture and as a result the emergency light fixtures now require less or smaller battery backup, meaning increased cost savings as well as reduced frequency for maintenance.”

The manufacturing site currently has approximately 2700 fixtures with 4200 fluorescent lamps that consume 1,000,000 kW/h of electricity at a cost of £100,000 a year and costs approximately £5,000 in materials and 200 man hours a year to maintain. Once the retrofit is completed, the company would expect to see 25% – 40% reduction in electricity consumption, saving tens of thousands of pounds per year.