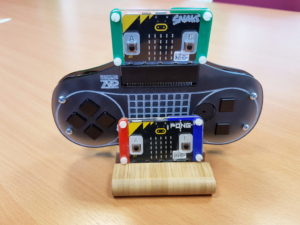 Kitronik launches :GAME ZIP 64 which allows gamers and makers to code their own retro games – including Snake and Pong!

The next generation of teenagers will be able to enjoy the classic computer games of Pong and Snake thanks to a new gaming device produced by Kitronik. Now, students and young at heart adults will not only be able to play them, but code them themselves using the powerful BBC micro:bit.

Kitronik has created the :GAME ZIP 64 which brings the simple fun of these classic games to today’s teenagers. The device will be unveiled for the first time at the Bett Show at London’s Excel Centre from the 24-27th January.

The :GAME ZIP 64 has been designed to be an all in one gaming platform for the micro:bit, which also includes its own screen comprised of 64 individually addressable full colour ZIP LEDs. It features on-board sound, directional buttons, fire buttons, haptic feedback, and breakout points so shoulder buttons or i2C devices can be added. All of these features are fully programmable. Kitronik has also included breakout points to allow for the use of larger LED screens. 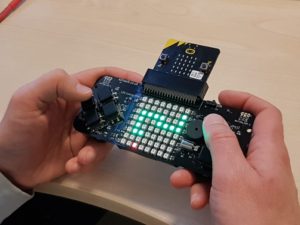 Power is provided via the built in 3 x AA battery cages which have been ergonomically placed to act as hand grips which makes the :GAME ZIP 64 comfortable to hold and play.

To introduce users to coding their own games, Kitronik has created example games in both MakeCode Blocks and MicroPython. These can be downloaded free of charge enabling the games to be played immediately!

The :GAME ZIP 64 can also be coded to be used as a controller in other robotics projects involving the BBC micro:bit, such as Kitronik’s popular :Move Mini Buggy. All aspects of the BBC micro:bit can be used, such as the tilt, light and movement sensors which brings a wide range of possibilities to electronics projects. 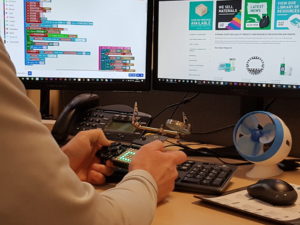 Key features of the :GAME ZIP 64 include:

Users can also customise the :GAME ZIP 64 by using laser cut Perspex to create their own cases as shown below. The Kitronik MI:pro protector cases can also be used to create a game cartridge that can be labelled and that will not only protect the BBC micro:bit from damage, but also from accidental overwriting. 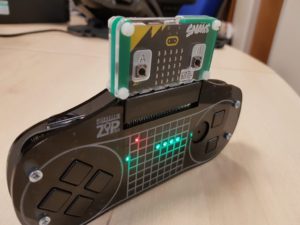 Commenting on the launch of the :GAME ZIP 64, Kitronik co-founder Kevin Spurr said: “We all remember playing Pong and Snake in our youth and we wanted to bring the simple fun of these games to the BBC micro:bit. Students, makers and gamers in the UK, Europe and America who use the BBC micro:bit, can now code their own games, enjoying not just playing them, but making them too. We believe that this is the best way to raise interest in and teach coding skills. If young people are coding and making something they then enjoy using, they are far more likely to continue developing their digital skills.”

Kitronik is exhibiting at the Bett Show from 24-27 January and will be exhibiting the :Game ZIP 64 for the first time, along with other exciting BBC micro:bit compatible products. Kitronik will be on stand C495 and Kitronik co-founders Kevin Spurr and Geoff Hampson are happy to demonstrate the firm’s products.