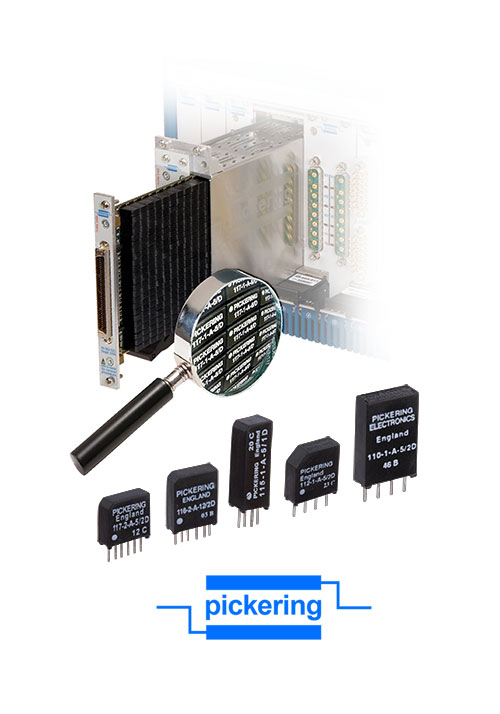 Reed Relays remain an attractive solution for switching applications. Having a metallic path, they do not suffer from a relatively high contact resistance and high off-state leakage current usually associated with solid state relays. Often though, they are considered a mundane component and little thought is given to them by the design Engineer which can lead to problems.

In general, the most common construction for a reed relay offers no magnetic screening, involves the use of a hard moulded package and an operating coil wound on a plastic bobbin surrounding the reed switch capsule. Pickering offer a technically superior solution.

A reed relay in its most basic form consists of a pair of ferro-magnetic switch contacts enclosed in a hermetically sealed glass envelope.  Around this is wound a coil of wire which acts as an electro-magnet to close this switch when an energising voltage is applied.  With an unscreened relay this magnetic field completely surrounds the device and affects any other relays that may be close by resulting in a change in the coil voltage required to operate them. Where many relays are packed very densely, for example, in an ATE switching matrix, it is sometimes possible for this interaction to de-sensitize the relay and prevent it from operating.

The industry standard specification for the coil voltage by which a reed relay must operate is 75 per cent of its nominal value, for a 5 volt device this would be equal to 3.75 volts at 25 degrees Centigrade. The copper coil wire has a positive coefficient of resistance of around 4% per degree Centigrade so its resistance will increase at this rate with a corresponding fall in the level of current and therefore the magnetic field generated. This also needs to be considered for higher temperature applications.

Let us imagine three relays stacked side by side with the outer two energised. Please see the illustration. We now wish to turn on the middle one. The magnetic fields from the two outer relays acting on the centre one will tend to increase further the voltage required to operate the switch.  An increase of 30-40 percent is perhaps surprisingly, a realistic one for unscreened relays on 0.15 inches pitch.  With this increase and possibly even more when temperature effects are also considered, plus a voltage drop in the relay driver, it is possible that the relay will not turn on with a 5 volt supply.

This is why Pickering believe that a mu-metal magnetic screen is absolutely essential for high density applications to eliminate these issues and enhance efficiency.

Instead of the more usual hard moulded package, Pickering use our SoftCenter® technology, whereby a soft inner material is used to protect the delicate glass to metal seal of the reed switch capsule against expansion mismatches. This de-stresses the switch ensuring accurate alignment of the switch blades which in turn gives a longer and more reliable life.

Even quite minor stresses, tensile, compressive or torsional can slightly move the contact area of the switch blades which results in contact resistance instability which can easily be detected during extended life testing. 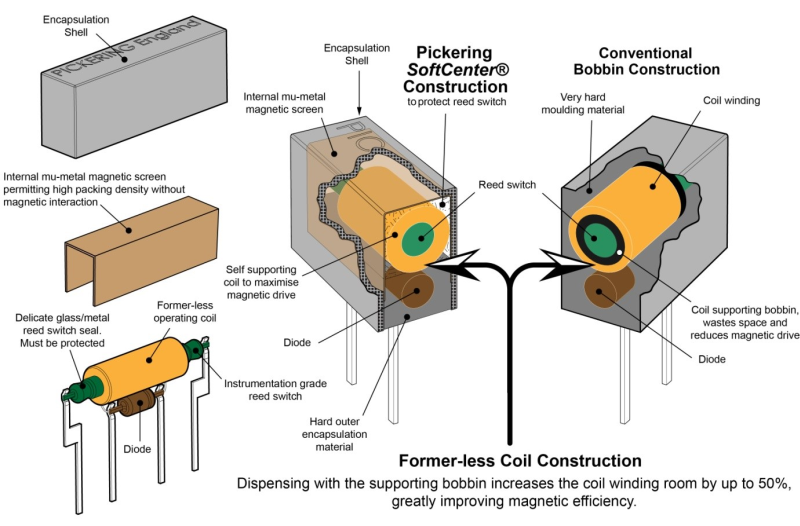 The operating coil in all Pickering Single-in-Line and Surface Mount reed relays is former-less, with no supporting bobbin. This is sometimes referred to as an air coil. The coil is wound on fully automatic machinery using a special enamelled copper wire that is coated with a heat sensitive adhesive. As the coil is wound on the tool mandrel, a jet of hot air is directed at the coil to melt the adhesive so that the coil forms a solid assembly. Where fine gauges are used, the termination wires at both the start and finish of the coil are automatically skeined by the machine, usually three strands, to give additional strength where it is internally connected to the leadframe. After the coil is cooled by a jet of air, it is ejected from the tool. The process provides coils of a consistent quality and repeatability. The finished coil is placed directly over the glass reed switch capsule as in the illustration and it is clear to see how much extra space is available for the winding. The magnetic efficiency is greatly improved because of the closer coupling of the coils magnetic field and the fact that the inner turns are more effective because of the smaller circumference (more turns per Ohm).

The increase in room for the coil winding allows Pickering to achieve smaller packages, high coil resistance figures or gives the possibility of using less sensitive switches with inherently higher operating and restoring forces, according to the product in which it is used.