On-Systems, a young British company that specialises in innovative power supply design for harsh environments, has won the accolade of Power System Product of the Year at this year’s prestigious Elektra Awards with Pebble, its rugged, EMI-silent laptop power supply for defence, avionics and mobile applications. 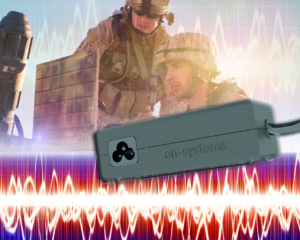 Traditional military-grade PSUs must be electrically ‘silent’ for use in secure, harsh environments, weigh 2-3kg and are about the same size as a laptop because they need so much filtering and heat sinking. Launched earlier this year, Pebble is 90 per cent smaller and lighter and 80 per cent lower in cost than standard military-grade PSUs, achieved by combining a new topology, custom-designed FET drivers and fast switching speed to deliver a power supply with industry-changing benefits. Pebble represents a quantum leap forward in the design of harsh-environment laptop power supplies, and is On-System’s first product.

The technology behind Pebble is a new topology that combines three stages into one, reducing I²R losses and increasing efficiency. Working with a leading power semiconductor company, On-Systems designed new very fast FET drivers, allowing Pebble to switch at up to 40 times typical switching frequencies. This high speed reduces the size of the EMC filtering components required, so that the laptop PSU meets all defence EMC performance standards in a package measuring just 115 x 52 x 36mm and weighing only 180g. Pebble is 96 per cent efficient, operates over universal AC input range and wide DC input range and features short circuit, overload and overvoltage protection.

Receiving the Elektra Award for Power System Product of the Year at a glittering ceremony in London’s Grosvenor House Hotel last week, On-Systems’ CCO Mike Harvey said: “I’m delighted and proud to have won this Elektra Award and would like to thank the whole team at On-Systems for its outstanding work which made Pebble possible. We look forward to utilising our technology to deliver industry-changing benefits across not only military, but many other harsh-environment applications, including aerospace and medical.”