Passives are powering the component distribution market in Germany

The German component distribution market reported solid but sluggish growth for the third quarter of 2018. According to the distribution companies registered with the Fachverband Bauelemente Distribution (FBDi e.V.), sales during the period July to September 2018 grew by 4.7 per cent to reach 980 million euros. The pattern of orders continued the trend of previous quarters, with orders growing significantly faster than sales – by 9.5 per cent to 1.08 billion euros. The book-to-bill rate (the ratio of incoming orders to sales) rose to 1.1. 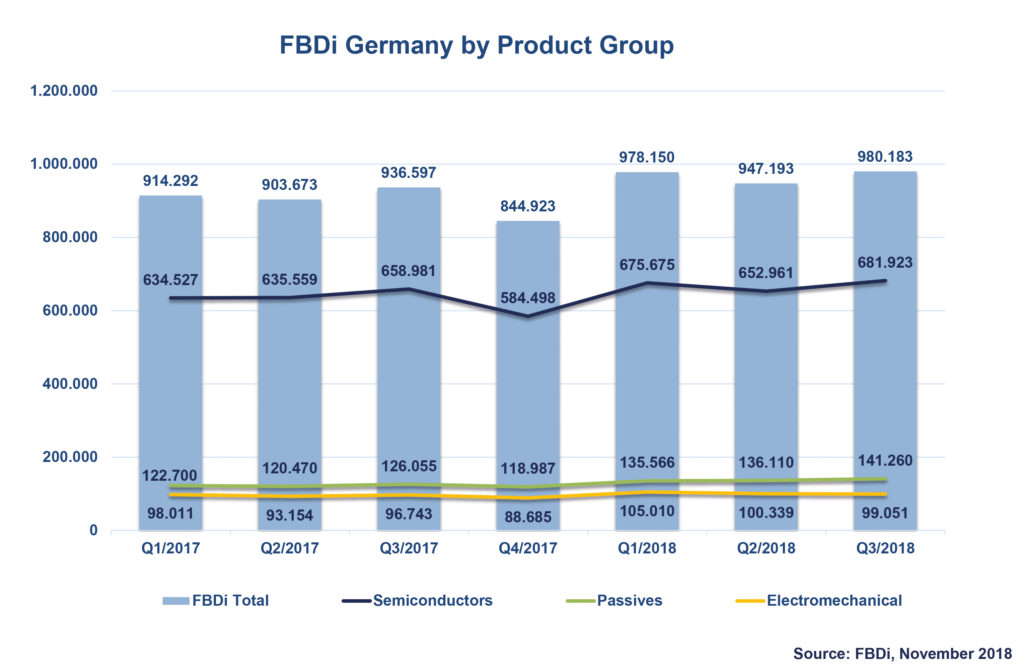 Consequently, the sales reported by the FBDi during the first nine months reveal an optimistic picture with an increase of 5.5 per cent taking the overall figure to 2.9 billion euros and a healthy order backlog across all areas, but particularly for passive components – where order growth reached 21.6 per cent.

FBDi chairman of the Board of Directors Georg Steinberger remarked: “For over two years, we have seen an increase in orders that is only partially reflected in sales. The year 2018 in particular has broken numerous order records, but there is still a risk that cancellations or postponements will significantly curtail the order backlog. The poor delivery situation and long delivery times are dampening any expectations of further significant progress in the fourth quarter, which means that 2018 will draw to a close with sales growth of five to six per cent and many unfulfilled expectations on the customer side.”

Turning to the general future outlook, Steinberger noted: “Despite all the macroeconomic obstacles, high-tech remains a hot topic. Considering how little specific action is being taken by European governments in the areas of digitalisation, smart infrastructure and energy transition and how its urgency will grow in the next few years, I have no major concerns regarding the growth prospects for components. There is also the fact that industry is currently undergoing a new revolution: Robotics, machine learning and artificial intelligence are set to fundamentally change the way we live and work – all of which calls for the right hardware.”