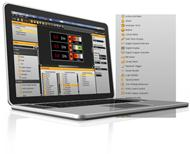 Lascar Electronics has launched PanelPilotACE, a new hardware and software display platform that enables the rapid development of fully customised industrial and commercial user interfaces and panel meters. PanelPilotACE’s combination of a multifunctional touch-screen colour display with simple drag-and-drop design software removes the need for any coding, cutting development time for even the most advanced displays by months.

The PanelPilotACE Design Studio software provides a number of building blocks to allow users to easily add elements to their project. From background images to text elements, analogue and digital style meters, touch-screen navigation elements and even complex logic statements, users can rapidly build up sophisticated multi-screen interfaces without needing to write a single line of code.

When complete, designs are uploaded to the first PanelPilotACE compatible display hardware, the SGD 43-A, via USB. This display features multiple standard inputs and interfaces, providing the flexibility for users to implement touch-screen navigation, measurement and display of analogue, digital and bus inputs, as well as control of outputs and alarms.

Commenting Ben Savage, PanelPilot Manager at Lascar, said: “PanelPilotACE really does make the development of advanced user interfaces as simple as dragging and dropping all of the elements you want onto a screen. That ease-of-use means that PanelPilotACE is a true blank canvas – enabling users to quickly create, at a fraction of the cost of alternative development paths, an almost unlimited variety of intuitive interfaces.”

The free to download PanelPilotACE Design Studio software comes with a library of pre-defined elements, but users can also create or import their own elements to allow plenty of scope for creativity – enabling the display to be tailored for almost any industrial or commercial application.

The SGD 43-A is designed to be panel mounted, making it easy to integrate into a range of industrial and manufacturing applications and processes, but can just as easily be adapted for other commercial uses – as a touch-screen control panel in medical devices, for monitoring in scientific research, or even as an information display in museums or other public buildings.

Users can test software on emulated hardware before uploading the designs quickly and easily via USB.