Omron Electronic Components Europe announced a faster version of its face recognition module, boasting a maximum recognition speed of up to ten times that of the existing unit. Using Omron’s HVC module, any embedded developer can add face recognition functionality to a system without the need to understand the algorithms or the optical design.

As before, the Omron HVC-P2 B5T offers ten key image sensing functions: detection of a human face, hand or body, face recognition, gender detection, age estimation, mood estimation, facial pose estimation, gaze estimation and blink estimation. In each case the module returns a value together with a degree of certainty, allowing the programmer to configure the response appropriately for each individual application. HVC is designed in a very compact configuration and can be easily integrated into an established system or implemented as part of a new design. 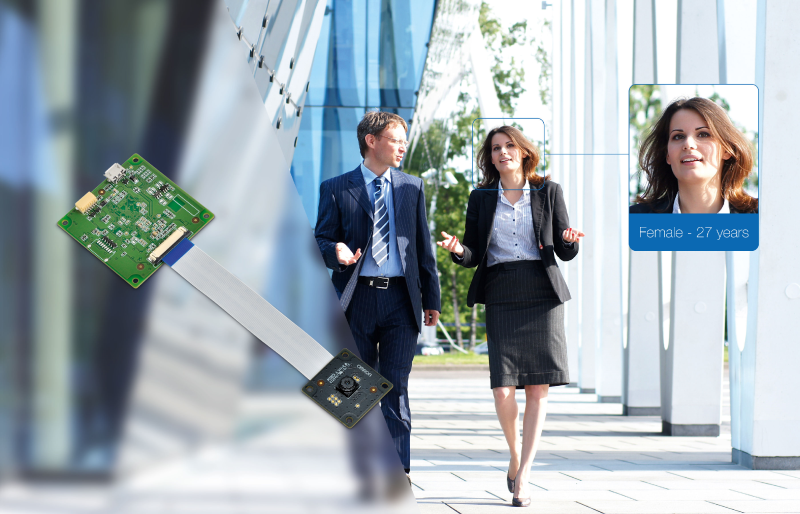 Fabrizio Petris, senior business development manager, Omron Electronic Components Europe, said, “Face recognition functionality is used in a wide range of systems in medical, industrial control, digital advertising, security and other applications. The new HVC-P2 module handles all the complexity of seeing and recognising faces, bodies and gestures, all the integrator needs to do is read the data output and programme the system to react appropriately.”

New features of the HVC-P2 module include greater speed and consistency of response, and an increased distance over which readings can be taken. To make the module easier to integrate, it is now supplied in two parts: a 25x25mm camera board and a main 45x45mm board. There are two types available. A long range type has an angle of view of 40° x 50° and a wide angle type with 70° x 90°. The module is now also available with a choice of a UART or USB interface.

The module is based on the Omron OKAO Vision software, a proven set of image recognition algorithms used in over 500 million digital cameras, mobile phones and surveillance robots around the world. HVC embeds OKAO on a hardware platform optimised specifically in terms of its digital and optical design for this application. HVC includes a camera and a processor, and a USB or UART interface to control the module and read data.

Photo caption: Omron has announced a faster version of its face recognition module, boasting a maximum recognition speed of up to ten times that of the existing unit