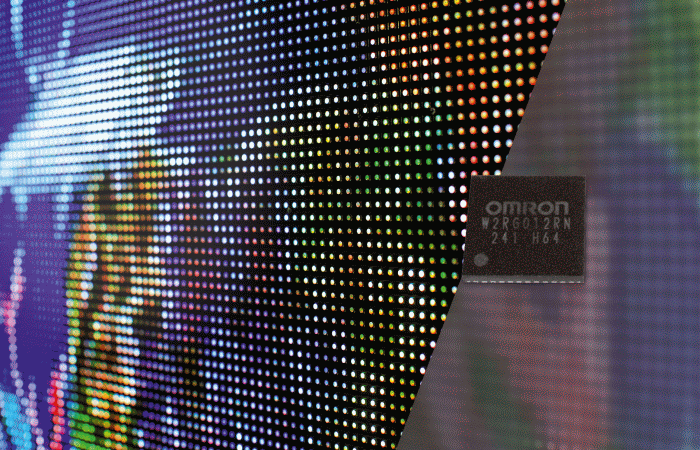 A new LED matrix control IC launched by Omron Electronic Components Europe supports a smooth fade-in and fade-out of LED brightness, so that the transition is undetectable to the human eye at any point.

Aimed at LED arrays in signage, backlights and other applications, the new Omron W2RG012RN can control the brightness of up to 128 individual LEDs with just one IC. Its key feature is that it controls brightness using a PWM function, increasing the brightness gradually, and increasing the rate of change exponentially as the light output increases. Since the human eye is more sensitive to dimmer light, this gives the impression of a completely smooth and even change in brightness, with no perceptible steps or flickering. Conventional luminance control is in even steps which appear uneven to the eye due to its variable response to brightness.

The new Omron LED control IC is controlled through a serial bus connection, which allows up to 15 ICs to be connected on the same communication line. The 24 constant current outputs deliver a maximum current of 80mA per pin. They can be configured to support arrays of 16 x 8, 24 x 4, 24 x 2 or 24 x 1 LEDs. The brightness of each individual LED can be greater with the smaller arrays. The device is just 7mm x 7mm in size and features a built-in thermal shut-down.