OMC, the pioneer in optoelectronics design and manufacture, has announced that its Keyed SMA (KSMA) fibre optic system launched last October is now available in all of its standard SMA diode housings. The KSMA connector and diode receptacle system for OMC’s fibre optic transmitters and receivers deliver the rotational consistency of a keyed connector combined with the security and reliability of the SMA connector and is ideal for optically demanding and long service life applications. Thanks to the rugged, all-metal design, the connector system is robust and suits multiple applications, across many industry sectors, including industrial and consumer, transportation, medical, aerospace, petrochemical and power distribution. 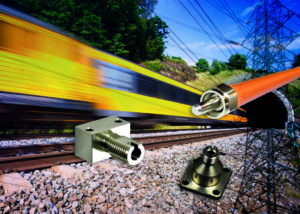 OMC’s KSMA connector system features a mechanical keyway mechanism that eliminates any rotational variation when a cable is mated to the transmitter or receiver, while also featuring the same secure hexagonal lock-nut fixing found in OMC’s standard SMA connector. Ensuring there is no rotational variation between matings is useful because if a cable is disconnected and reconnected, traditional non-keyed SMA devices can rotate throughout a full 360 degrees, possibly resulting in performance variations and limiting repeatability, which can be problematic in optically-demanding applications. The lock-nut ensures that the optical fibre is held firmly in place, unlike spring-loaded connectors which can allow the fibre to move and change the attenuation of the link if the cable is subjected to any tension.

OMC’s commercial director, William Heath says: “Designing the fibre optic element of a system can be very challenging, as most companies that manufacture transmitters and receivers do not necessarily specialise in fibre optic cables and vice-versa. We design, manufacture and test all our transmitters, receivers and cable assemblies at our UK facility and can control optical performance to meet application requirements exactly. As well as over 30 years’ experience in the industrial fibre optics sector, we recently expanded into a new purpose-built manufacturing facility and invested in new, state-of-the-art CNC machining equipment to produce our advanced fibre optic connector systems and components even more cost-effectively and with greater design freedom than ever before.”