OMC, the pioneer in optoelectronics manufacturing, has launched two new high density PCB-mounting SMA (H22) style housings for its wide range of fibre optic transmitters and receivers which save board space and ensure long-term performance. 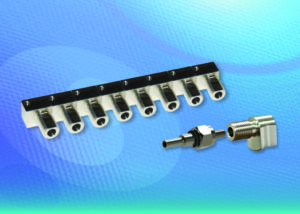 The company has released two new space-saving housing styles: High Density SMA (HDSMA) which is designed to be edge-to-edge stackable while offering enhanced board density, and Vertical SMA (VSMA) which offers an even smaller PCB footprint for applications where devices are used singly on a PCB.

The new high-density HDSMA housing has PCB footprint of 10mm x 7mm, offering a potential increase in device density over the traditional SMA (H22) PCB mount housing of between 22 and 50 per cent depending on the amount of board edge available. The package is designed for systems requiring multiple Tx/Rx channels per PCB and features an all-metal, bolt-down design. OMC’s full range of fibre-optic emitter and receiver diodes can be supplied aligned and mounted in the new HDSMA receptacle.

The company’s new Vertical SMA (VSMA) package has a PCB footprint of only 8mm x 7mm which OMC believe makes it the world’s smallest PCB footprint SMA fibre-optic housing. With a modern, slimline design and all-metal body, the VSMA device bolts in place with a single screw and features a locating lip which slots into a groove in the PCB edge to securely fix the device in place. The VSMA package is designed to allow a fibre-optic transmitter or receiver to be incorporated into a PCB design while occupying the minimum possible PCB space. It is available with a wide range of visible and infrared emitters and fibre-optic receivers aligned and mounted within.

The new housings still permit the use of a standard SMA connector with secure hexagonal locking nut. Both have been designed to meet the demand for space-saving fibre-optic devices in the modern age of miniaturisation in which PCB area is at a premium.

Explains OMC’s commercial director, William Heath: “The VSMA device takes up minimum possible space if a designer is incorporating single devices onto their PCB, while the HDSMA edge-stacking receptacle allows many more devices to fit into the same amount of space where multiple channels are required. For example, in 100mm of board edge a designer can fit 10 HDSMA receptacles whereas with the traditional PCB mount SMA package they would be restricted to seven devices.”

“SMA is a secure connector system, as once the connector nut is tightened the fibre is locked in place – unlike, for example, sprung connectors whereby even when the connection is made any tension on the cable will allow the fibre to move and change the attenuation of the link, as you create an air gap. Our new packages retain all the benefits of a traditional SMA (H22 style) housing, such as its rugged, all-metal design and secure bolt fixing to the PCB, but enables designers to reduce the size of their designs, saving cost and offering an environmental advantage – or to include extra channels in the same space for added functionality, while ensuring secure and reliable long-term performance.”

The new packages suit industrial applications where a fit-and-forget approach is desired or in applications subject to high vibration, and as with their standard SMA connector, a small hex spanner is used to gently tighten the lock nut after installation. As well as securing the link, this reduces the likelihood of casual tampering or unintentional demating.