Newbury Electronics, a leader in the provision of bare PCBs, assembled electronics and electronics design, has announced the appointment of John Rowley as Managing Director. The role was previously held by Philip King, who now becomes Chairman. John brings with him nearly 20 years’ experience in the electronics sector.

“I am excited about taking on this pivotal role at Newbury Electronics, a company that has gone from strength to strength under Phil’s leadership. With over £3.5 million pounds’ worth of capital investment in the last few years and more to follow in the next few months, the company is one of the best equipped in the country to meet the demands of modern electronics engineering production and deliver a comprehensive and reliable service to both new and existing customers,” said John Rowley.

Philip King, said; “John has only been here a few weeks but already he has brought new energy and ideas to the business. I will be less involved in the day-to-day running of the company but look forward to supporting John and seeing how he takes the company forward to the next stage of its development.”

Investment in both equipment and staff is key part of Newbury Electronics continuing business growth and development. In response to increasing numbers of orders the company is in the final stages of extending its manufacturing capacity and will be completing the installation of several new pieces of equipment for the assembly side of the business in Q1. This will be followed by the launch of a Dutch language version of the company’s website, with plans for other European languages well underway. 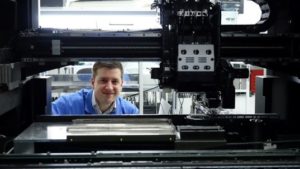 “I’m looking forward to developing new markets both in the UK and overseas and there are real opportunities in sectors such as power electronics, auto-sport and medical. I have a firm belief that strong communication and investing in people is key to success and will be looking for ways of implementing some new ideas and approaches in due course,” continued John. Both Newbury Electronics and its sister company Newbury Innovation are currently seeking suitable candidates to fill several manufacturing and design vacancies, interested parties can contact John who will direct them accordingly.

Prior to joining Newbury Electronics, John developed his career in a range of positions, including Operations Manager, Operations Director and culminating as Managing Director at SMT Developments. At the same time, he studied for his Master’s in Business Administration, graduated from the Great 200 Leaders programme and is a recipient of The Manufacturer’s Top 100 awards. John holds technical expertise within the electronics manufacturing and automation sector, having overseen the development and subsequent manufacture of 1,000’s of different electronic devices. Components Bureau are pleased to announce the new DC/DC converters AER20-W and AER20-DW from AUTRONIC. …