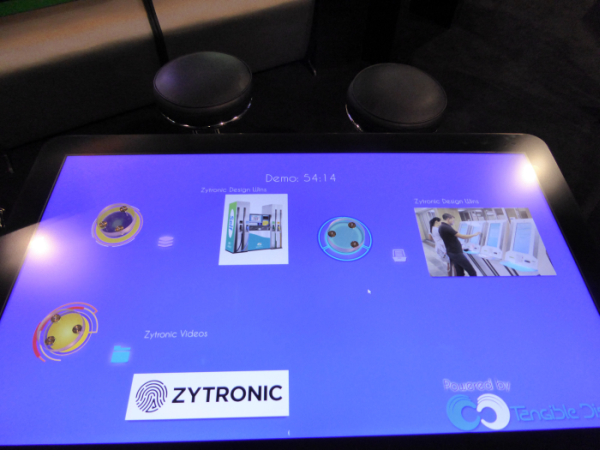 Zytronic, a leader in custom designed, high performance Projected Capacitive Technology (PCT™ and MPCT™) touch sensors is showcasing its latest object recognition functionality, ObjectViz, at electronica (stand A3.319) and demonstrating its force sensing capability for the first time at the event.

Ian Crosby, Sales and Marketing Director at Zytronic, said, “We’re showing visitors to electronica two completely new ways of interacting with our touch screens.  Object recognition provides an additional way of engaging the user and by making it available on much larger screens, delivers a more immersive experience in high end retail applications. Force or pressure sensing is a way of interacting with touch screens currently gaining popularity in handheld consumer devices, and we are leading the industry in making it available for touchscreens in public locations, giving self-service system developers a fantastic opportunity to innovate. It is particularly powerful when used in combination with Zytronic multi touch technology, exceeding what is possible on all but the most advanced tablets and smartphones today.”

Developed in partnership with Tangible Display, the Zytronic object recognition functionality is available on touch tables up to 85” in diagonal.  The two companies believe this is the first time that camera-free object recognition functionality has been made available on capacitive touch screens of this size. The solution is based on the attachment of physical markers to the objects – it does not require modification of the touch table hardware.

A key advantage of the combined Zytronic and Tangible Display technology is that non-conductive objects are ignored. A pen or a bag left on the table or a garment making contact with the glass will be disregarded. The controller is programmed to recognise only specific Phymarks attached to an object, and respond accordingly. A full report of user interactions can be created for later review and analysis.

Also shown for the first time is force sensing on Zytronic PCT™ and MPCT™ touch sensors allowing developers of ATMs, kiosks, game terminals and interactive video walls to differentiate between a soft and hard touch. Force or pressure sensing is becoming available on smartphones and tablets. Zytronic is a pioneer in bringing it to financial, retail, gaming, industrial and other commercial touch screen applications. Zytronic’s approach is based on a measurement of the surface area of an applied touch, which changes the measured capacitive signal levels at the relative touch location on the sensor. This eliminates the need for a piezo-electric or other layers on the glass to measure applied force or pressure.

Both object recognition and force sensing functionality are implemented in touch controller firmware and higher level software and require no modification of the sensor hardware. Existing customers could retrofit existing screens by simply installing the custom Zytronic firmware and adapting their application to respond appropriately.

Also on the Zytronic stand will be an immersive curved 40” curved, multi-touch kiosk featuring a single edge to edge, toughened and curved glass multi-touch interface with a seamless 40” main screen and a 19” waist-height, button deck. Demonstrating the near limitless levels of customisation possible with Zytronic technology, the twin display/single glass surface is managed by two ZXY200® multi-touch controllers. A variety of other touch displays will be present on the stand, showcasing the unrivalled design flexibility and durability of Zytronic’s unique technology in sizes up to 85”.