On-Systems, a young British company that specializes in innovative power supply design for harsh environments, has launched Pebble, a new COTS, rugged, EMI-silent laptop power supply for defence, avionics and mobile applications that is a fraction of the size, weight and cost of current designs. Pebble is the first in a series of harsh-environment PSUs from the company which combine a new topology, custom-designed FET drivers and fast switching speed to deliver industry-changing benefits. 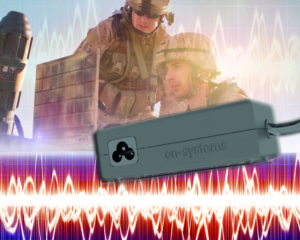 On-Systems’ CCO Mike Harvey explains: “Traditional laptop power supplies that must be electrically-‘silent’ for use in secure, harsh environments are about the same size as a laptop and weigh 2-3kg, because they need so much filtering and heatsinking. Pebble, by contrast, retains the familiar look and feel of a commercial power adaptor, yet it is fully certified for defence use. More, we can use the same technology in other applications – notably in aircraft fuel pump systems – where the space and weigh saving will be of especial interest.”