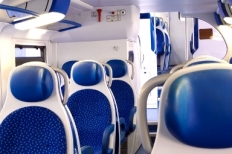 After five years of development and design evolution based on field data, the VESA VCB performance has been qualified for high and medium-speed trains (underground, commuter suburban and freight trains) worldwide and operates successfully in a range of varying weather and climate conditions.

Globally public transportation markets are being confronted with major challenges as the constant growth of urban centres puts pressure on commute and travel times, creating a growing demand for green technologies and efficiently engineered railway solutions. One of the worldwide “megatrends” involves the electrification of passenger trains, enabling new efficient solutions which weigh less and use less energy. As a result train engineers are increasingly advocating line power disruptive technology which plays such an integral role in railway electrification.

Providing the market with a solution exhibiting lower total installed cost while allowing the removal of bulky pneumatic systems makes this solution an exciting and reliable product for both new designs and refurbishment programs.”

Traditionally, circuit breakers were actuated by compressed air provided by a compressor and reservoir system. The pneumatic infrastructure of the line power circuit breaker is independent from the main pneumatic system which feeds the train brakes. While the additional pneumatic circuit breaker system has been considered a proven technology for decades, pneumatic systems tend to be seen in a more critical light today due to their space and weight requirements, relative complexity, reliability issues and associated maintenance needs. Additionally, pneumatic systems are less energy-efficient as air needs to be compressed and energy is dissipated in the form of heat loss. Actuating the circuit breaker with electric energy in one step eliminates the air compression stage and the energy losses that are associated with it.

According to TE the VESA VCB system needs less servicing than conventional pneumatic systems; it requires a smaller sized air supply and a compressor for the pantograph actuation. There is no further need for pneumatic plumbing. In addition, the VCB is amongst the lightest in its class and is less than half the weight of some pneumatic products on the market; the system has low electric power consumption for reduced power demand on the train’s low-voltage system. In addition it offers traction energy savings from the significant overall weight reduction combined with reduced aerodynamic drag.