OMC, the pioneer in optoelectronics design and manufacture, has introduced a new range of narrow angle, surface-mount LEDs in a variety of package styles and all popular LED wavelengths. The new SMD emitter series features integrated lenses moulded into the package which provides a 30 degree output beam. Applications for visible wavelengths include signalling and indication, in which the beam needs to be visible over greater distances, while the company’s infrared wavelength versions are used for sensing and data-communication over greater distances and with higher precision than using standard, wide-angle SMD components. 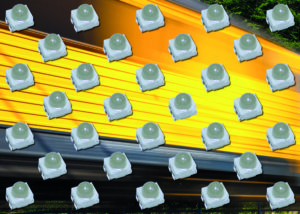 Traditional through-hole (non-surface-mount) LEDs are commonly produced with narrow output angles as the LED body is generally moulded around the leadframe using an optical epoxy or silicone. The LED body itself then acts as the lens, focusing the light into beam angles as narrow as 5 degrees, with 30 degrees being a common requirement for many indication and sensing applications. However, with the move to surface-mount components, some design versatility was lost as the LED body is generally injection moulded from non-optical material which is pre-manufactured before the LED die is mounted, and does not therefore form a lens in the same way. As a result, the majority of SMD packages do not incorporate any lensing, emitting light in a wide beam angle which generally exceeds 100°.

Using a proprietary post die-mount encapsulation process, OMC is able to cost-effectively integrate narrow angle lensing into a range of surface-mount emitters, and can now offer 30 degree beam angles for all standard LED wavelengths, including infrared.

OMC’s commercial director, William Heath comments: “Providing a clear human-machine interface is vital, as is ensuring precision and accuracy in a sensing system, and so the selection of the correct light-emitting components is a key design task. Narrow angle SMD LEDs are very much in demand across a wide spectrum of applications, such as sensing and communications, signalling and indication, but are less commonly available than wide angle devices, particularly for custom wavelengths and CCT/CRIs. This new series of 30 degree surface-mount LEDs opens up design possibilities for engineers, and in addition to standard devices, we are able to customise the devices to provide the wavelength or other light characteristics the customer may require.”