With the sixth stage of the ErP Regulation (EC) 244/2009 coming into force on 1 September 2018, prohibiting certain inefficient non-directional Halogen lamps on the market, LEDVANCE conducted a consumer study that has revealed a lack of knowledge about the ban in Europe.

An international consumer survey commissioned by LEDVANCE has highlighted a significant lack of knowledge about the imminent “ban” on halogen lamps. 64 per cent of UK consumers are unaware that, among others, the popular halogen light bulb can no longer be put into circulation anywhere in the EU from September 2018. And that figure is a further 10 per cent higher if the consumers who have heard about the “ban” but are unclear about the consequences are included. A truly remarkable finding is that many of the people, who have not heard of the “ban”, consider themselves to be knowledgeable about lighting. 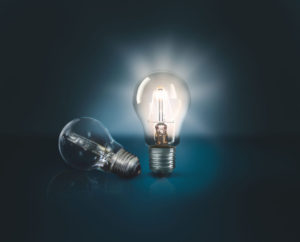 Since the autumn of 2009 energy-inefficient lamps have gradually disappeared from the market in accordance with a European directive. For retailers and producers there are more changes from 1 September this year when the next stage of the “halogen lamp ban” comes into force. After that date the relevant products may no longer be put into circulation in the UK or anywhere else in the EU. The “ban” mainly covers the popular classic halogen light bulbs that are typically made of glass, emit light all round, have an E27 or E14 screw base and are operated without a transformer. Some non-directional halogen lamps with G4 and GY6.35 plug-in bases are also affected. There will be a certain delay before consumers feel the effects of the “ban”, however, because retailers are allowed to sell their residual stocks. Consumers therefore have sufficient time to upgrade their lighting to modern LED lamps.

Awareness of the halogen ban is linked with age, education and income

The results of the international consumer study commissioned by LEDVANCE clearly show that there is a considerable need for more information about the “ban” and its effects. In the UK alone nearly two thirds (64 per cent) of respondents had never heard of the imminent “halogen lamp ban”. If we add in the number of people who had heard about it but knew nothing about its consequences, that figure increases by 10 percentage points to 74 per cent. Also noticeable is the fact that nearly four fifths (79 per cent) of those who were unaware of the “ban” are in the 50 to 60 age group. Even more surprising is that just over half of the respondents (54 per cent) who had not heard about the next stage of the ban considered their knowledge of lighting systems to be good or at least adequate. By contrast, awareness in the 18 to 39 age group and among those with high incomes and high levels of education is particularly high.

In contrast to the UK, at the top of the table is Italy with 58 per cent of Italian respondents being aware of the imminent “ban”. Germany ranked mid-table with 49 per cent in terms of awareness of the halogen directive, and the British came in last with only 35 per cent, just behind Sweden with 39 per cent.

Things to look for when buying LED lamps

From the autumn of 2018 consumers need to rethink. There are already a large number of energy-efficient and cost-effective LED alternatives to halogen lamps on the market, such as those from LEDVANCE, which look remarkably like their halogen predecessors. LED retrofit lamps equipped with the latest filament technology are a good example as they can be used as direct replacements for old halogen light bulbs. The replacement products are available as all-glass versions, dimmable versions, and either clear or frosted. To ensure that during the transition phase consumers can familiarise themselves with the new products they should check the following information provided on the packaging by the manufacturers: