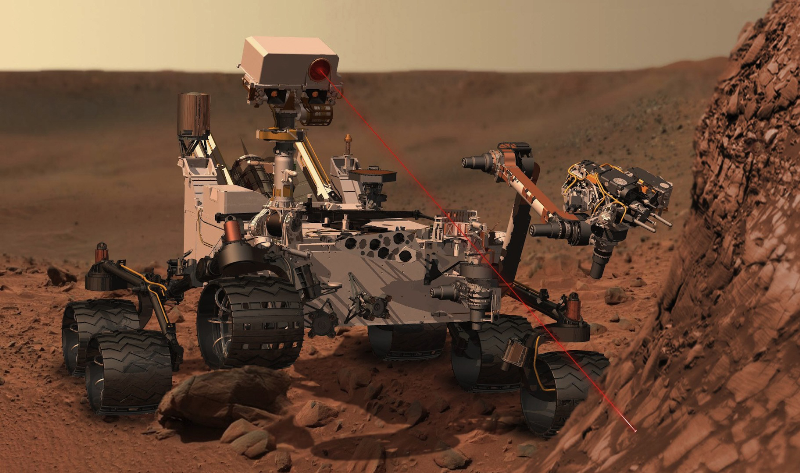 The ChemCam (chemistry and camera instrument) laser module on board of Mars rover ‘Curiosity’ – which successfully landed on Mars on 6th August 2012 – contains 630 tantalum multianode capacitors from AVX Corporation, a leading manufacturer of advanced passive components and interconnect solutions. The laser module is used to analyse chemical elements of rocks on Mars.

On 20th August 2012 ‘Curiosity’ successfully fired its laser for the first time on Mars to interrogate a fist-sized rock called ‘Coronation’. The laser from the rover’s ChemCam hit the rock with 30 pulses during a ten-second period. Each pulse delivered more than a million watts of power for about five one-billionths of a second.

“At AVX we are all very excited about the great success of NASA’s latest Mars mission and the ChemCam project. We are delighted to be a part – even if only a small one – of this exciting mission. This is a big step for all of us and we wish ‘Curiosity’ the best of luck,” comments Tomas Zednicek, PhD, Technical Marketing of AVX Tantalum Division, Lanskroun, Czech Republic.

About the ChemCam on board of NASA’s Mars rover ‘Curiosity’:

ChemCam’s laser, imager and telescope can be pointed at rock and soil targets in the vicinity of the rover from its position on top of the mast, 2 meters (6.6 feet) above the ground. Laser pulses vaporize a pinhead-size target up to 7 meters (32 feet) away, producing a flash of light from the material ionized by the laser. The telescope observes that flash of light.

An optical fiber from the mast unit delivers the telescope’s observation to the body unit, which analyzes the light from the ionized target material to identify chemical elements in the target. The body unit is 20 centimetres (7.9 inches) long.

JPL, a division of the California Institute of Technology in Pasadena, manages the Mars Science Laboratory mission for the NASA Science Mission Directorate, Washington.

Researchers will use the tools on the rover to study whether the landing region has had environmental conditions favourable for supporting microbial life and favourable for preserving clues about whether life existed.*

AVX Corporation is a leading international supplier of electronic passive components and interconnect solutions with 24 manufacturing and customer support facilities in 15 countries around the world. AVX offers a broad range of devices including capacitors, resistors, filters, timing and circuit protection devices and connectors. The company is publicly traded on the New York Stock Exchange (NYSE:AVX). Following feedback from across the sector, the deadline for entries in the Electronics Industry Awards …