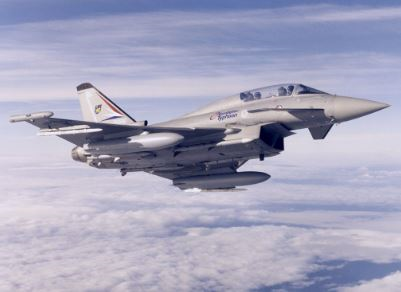 From the start of the prestigious multinational European military program Eurofighter, has supplied many thousands of EMC filters for the Eurofighter Typhoon aircraft.

The Typhoon was introduced into operational service in 2003. Currently, the type has entered service with the Royal Air Force as well as the Austrian, German, Italian, Royal Saudi and Spanish Air Forces. The Royal Air Force of Oman has also been confirmed as an export customer, bringing the procurement total to 571 aircraft as of 2013.

Supplied through MPE’s Italian distributor Ampere SpA of Milan, MPE’s custom ceramic capacitors are incorporated into the control mechanisms of the dispensers located below the fuselage for countermeasure chaff and flare decoys. MPE’s filters are specified to provide these devices with the highest level of electromagnetic interference protection.

Chaff and flare countermeasures are designed to neutralise threats from infrared- and radar-guided missiles, distracting them from their targets during combat missions. The aim of flares with burning temperature equal to or hotter than engine exhaust is to make the infrared-guided missile seek out the thermal signature of the flare rather than the aircraft’s engines.

Meanwhile the chaff dispense system will spread a cloud of particles of aluminium or metallised glass fibre, which either appear as a cluster of secondary targets on radar screens or swamp the screens with multiple returns.

Cobham in the UK is the design authority for the Eurofighter Typhoon’s defensive chaff and flare countermeasure systems.