Mouser Electronics, Inc., the New Product Introduction leader that empowers innovation, will sponsor the Dragon Racing team throughout the 2017–18 FIA Formula E racing season. The season kicks off December 2 and 3 at the Hong Kong ePrix doubleheader. 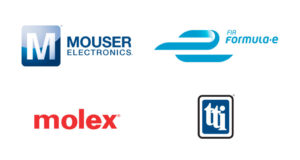 The 2017–2018 season marks the fourth edition of Formula E racing and the fourth-straight year that Mouser Electronics will be a team sponsor. Formula E features cars powered solely by electric power and represents a vision for the future of the motor sports industry, serving as a framework for research and development around zero-emission motoring. Mouser will sponsor Dragon Racing team throughout the 14-race season in collaboration with TTI, Inc. and valued supplier Molex.

“We are very proud to continue to sponsor Dragon Racing and to be a part of this forward-looking technology,” said Todd McAtee, vice president, Americas Business Development for Mouser Electronics. “The Dragon team finished strong last year, and we look forward to another great season ahead.”

“TTI is proud to once again support this thrilling team and the sustainable automotive technologies of the future,” stated Mike Morton, president, TTI Global Sales and Marketing.

“All of us at Molex are pleased for the opportunity to again team up with Mouser and TTI in sponsoring this pioneering venture,” said Fred Bell, vice president of Global Distribution for Molex. “We are thrilled to be involved in the development of the innovative technology behind Formula E.”

“Formula E cars require the latest sustainable and — most importantly — high-performance components to gain the competitive edge. By teaming up with TTI and Molex to sponsor Dragon Racing, Mouser shows its commitment to keeping engineers up to date with these innovative technologies,” McAtee added.

Founded by Jay Penske, Dragon Racing earned second place in team points in the inaugural 2014–2015 season, after clinching first and third finishes at the Berlin ePrix and another double-podium at London. This season’s drivers — Jerome D’Ambrosio, who won the 2015 Berlin ePrix and who had several strong outings with Dragon Racing last year, and Neel Jani, winner of the 2016 24 Hours of Le Mans and 2016 FIA WEC Drivers’ Championship — look to rack up more points with new Formula E races in Zurich and Rome.