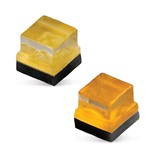 The XQ LED also features an innovative light-emission pattern where more light is directed to the sides than straight out of the package. Compared to standard LEDs, XQ LEDs allow the use of fewer LEDs to achieve a wide, distributed light pattern. Together, these innovations enable manufacturers to increase the light output, reliability, and omni-directionality of their designs. As we move into 2021, many electronic components analysts expect the market to continue experiencing …