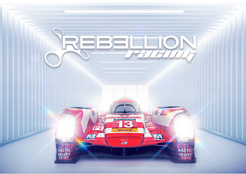 Mouser Electronics is sponsoring Rebellion Racing as the team gears up for the 6 Hours of Nürburgring in Nürburg, Germany on August 30th. Rebellion, a highly successful independent team from Switzerland, took a stunning 1-2 finish in the prestigious Privateer Class at the legendary 24 Hours Le Mans, and expectations could not be higher for the team at Nürburgring.

Driving the Mouser-sponsored Rebellion R-One car #13 will be the gifted team of Dominik “Do Do” Kraihamer, Alexandre Imperatori and Daniel Abt, who won the Privateer LMP1 Class Award at Le Mans. Once again, Rebellion R-One #12 will be helmed by Nicolas Prost, Nick Heidfeld and Mathias Beche, who secured second place at Le Mans. Powered by AER P60 V6 GDI twin-turbocharged engines, the Rebellion team earned the distinction of being the top two non-factory cars in their LMP1 class. Adding to the excitement, the August 30 race at Nürburgring marks the premiere of the FIA World Endurance Championship (WEC) in Germany.

“This will be a homecoming of sorts for the German-born Heidfeld and Abt, and we expect they will be on top of their game,” said Todd McAtee, Mouser Electronics’ vice president of Americas Business Development. “The entire team has been outstanding this season, and it’s a real honor to partner with Rebellion again. This high-tech sport aligns with our performance-driven business model and provides the perfect platform to raise awareness of the Mouser brand.”

Mouser is teaming with its manufacturer partner LEMO, a global leader in the design and production of precision custom connection solutions, to sponsor the Rebellion Racing team. Mouser distributes LEMO’s products, including a wide range of push-pull circular connectors and module connector solutions.

After Germany, the tour travels to the Circuit of the Americas in Austin, Texas, USA, on September 19th, followed by Fuji, Japan, on October 11th; Shanghai, China, on November 1st; and Sakhir, Bahrain, on November 21st.