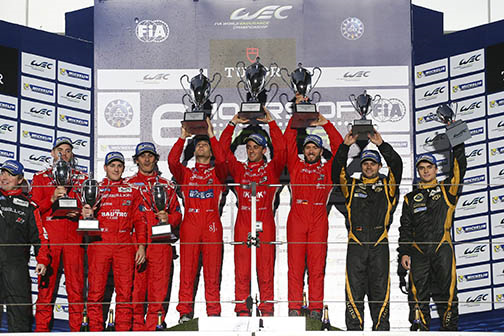 Mouser Electronics, the global authorised distributor with the newest semiconductors and electronic components, congratulated Rebellion Racing for winning the Number 1 and 2 spots in the prestigious Privateer LMP1 Class at this month”s 24 Hours of Le Mans race.

Driving the Mouser-sponsored Rebellion R-One #13 car, the talented team of Dominik “Do Do” Kraihamer, Alexandre Imperatori and Daniel Abt received the Privateer LMP1 Class Award – their third such victory in four years. The sister car #12, driven by Nicolas Prost, Nick Heidfeld and Mathias Beche, secured second place. Powered by AER P60 V6 GDI twin-turbocharged engines, the Rebellion team earned the distinction of being the top two non-factory cars in their LMP1 class.

The #12 and #13 Rebellion R-One LMP1 cars were completed just three weeks before the start of the race. The outstanding Rebellion technical crew also was honored with the 40th ESCRA Prize for Best Technical Assistance. ESCRA is the Ecole Supérieure du Commerce des Réseaux de l’Automobile which translates as the Academy for Commerce and Automobile Research.

“Wow! We are elated to win 1st and 2nd place in the Privateer LMP1 Class. What a tribute to the team’s incredible drive and talent to endure this 24-hour race. It is a real honor to be partnering with Rebellion again this season and we already are gearing up for the next race,” said Todd McAtee, Mouser Electronics’ Vice president of Business Development, Americas. “This high tech sport aligns with our performance-driven business model and provides the perfect platform to raise awareness for Mouser and our industry-leading partners.”

Known as the “Grand Prix of Endurance and Efficiency,” the 24 Heures Du Mans is among the world’s oldest known endurance race and part of the FIA WEC. It has occurred every year since its inception in 1923 near the French town of Le Mans. The team must balance speed with the car’s ability to endure racing at top speeds for 24 hours without damaging the engine or mechanics.