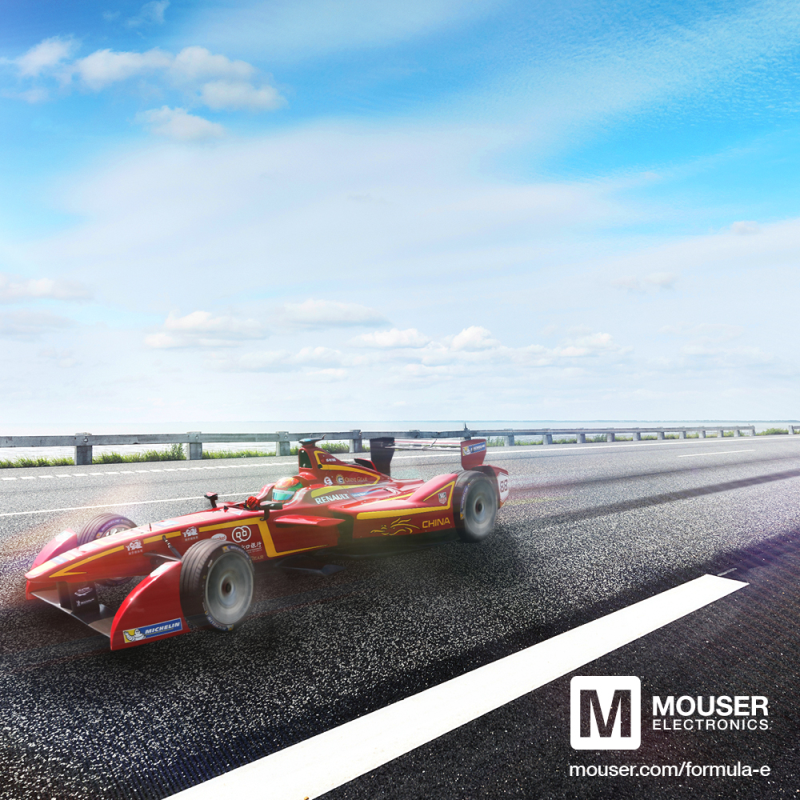 Mouser Electronics, the global authorised distributor with the newest semiconductors and electronic components, has congratulated Formula-E driver Nelson Piquet Jr. on a victory at the recent Moscow ePrix. With Piquet behind the wheel, the Mouser-sponsored team has high hopes for a historic World Championship-winning finish to an exhilarating inaugural Formula-E electric car race season.

The popular driver is now ranked No. 1 among the Formula-E series drivers with 128 points and a comfortable 17-point lead over No. 2 Lucas di Grassi. Piquet races for the Mouser-sponsored China Racing Formula-E Team, which is now ranked third overall as they prepare for the upcoming races at Battersea Park in London.

At the Moscow ePrix on June 6th, Piquet quickly took the lead from the second he left the grid. He broke away and led the race by as much as five seconds with 15 laps remaining, before managing his energy to eventually win by two seconds. He also took the top prize in California at the Long Beach ePrix in April after back-to-back podium finishes in Uruguay and Argentina.

Mouser-sponsored Piquet drives the all-electric Spark-Renault SRT_01E, which can go 0-60 in three seconds and has a top speed of 150 mph. Piquet heads to the season-ending London ePrix double-header June 27th-28th with two first-place finishes and a commanding lead in the driver championship standings.

“It’s very important to come to London leading the championship,” stated Piquet. “We know that we cannot afford to make any stupid mistakes, and we will have to work as well as we have done so far when it comes to the double-header in Battersea. We have always gone well in qualifying and I demonstrated that I had a good race pace, with the exception of Berlin, but here we ran as strongly as we had done in the previous ePrix.”

“Expectations could not be higher heading into the final two races,” said Todd McAtee, Mouser vice president for Business Development, Americas. “A third podium victory would be astounding to cap off an exciting season. It’s been amazing to watch these cutting-edge electric race cars in action. Along with our supplier partners, we are thrilled to support this high-tech sport that is paving the way for future automotive technologies. High-tech auto racing provides the perfect platform to raise awareness for Mouser and our industry-leading partners.”

Mouser is sponsoring the China Racing Formula-E Team this year in partnership with its valued partners Molex and Vishay Intertechnology.