Mouser Electronics, Inc., the New Product Introduction (NPI) leader that empowers innovation, has signed a global distribution agreement with Sfera Labs, developers of innovative hardware and software that bridges the best of the maker world with the professional automation market. Through the agreement, Mouser will stock Strato Pi and Iono Pi boards and servers, which address the fundamental requirements of professional applications based on the Raspberry Pi 3 single-board computer. 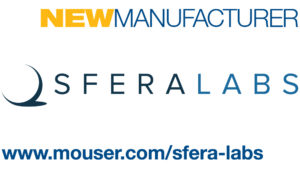 The Sfera Labs’ product line available from Mouser Electronics includes fully assembled Strato Pi and Iono Pi boards as well as corresponding CE-certified and FCC-compliant servers, which are assembled units that house the board and a Raspberry Pi 3 Model B single-board computer packaged in a compact DIN-standard case with omega-rail mounts.

Strato Pi boards and servers offer hardware features that make them suitable for use in professional applications where reliability and service continuity are key requirements. The Strato Pi UPS board and server provide an uninterruptible power supply (UPS) to the Raspberry Pi, delivering a nominal voltage of 5 V and up to 3 A for even the most demanding accessories and software applications. The Strato Pi CAN board and server implement an easy-to-use CAN bus controller with an opto-isolated physical interface. Strato Pi CAN features both RS-485 and CAN bus ports that can be used simultaneously. Strato Pi CAN implements the CAN specification version 2.0B, and support up to 1 Mbps speed.

Iono Pi is an extremely versatile input/output (I/O) module that combines several digital and analog input lines, power relay outputs and support for standard interfaces with the powerful computing core of the Raspberry Pi. Iono Pi adds a robust power supply with wide voltage range (9–28 V) capable of up to 3 A output current at 5 V, and a real time clock with lithium backup battery. Iono Pi can be used for a variety of applications ranging from data acquisition and control to home and building automation to access control.