Mouser Electronics, Inc. is teaming up with celebrity engineer Grant Imahara and a group of visionaries in autonomous vehicle technology to announce an exciting new Driverless Cars Series. The new series captures insights from some of the most influential companies on the topic, including CAVCOE, Mercedes, Cruise, Google, Delphi, AVX, ON Semiconductor and Carnegie Mellon/GM.

The new Driverless Cars Series is part of the award-winning Empowering Innovation Together™ program and is available only on Mouser.com. The new Innovation Spotlight video features Grant and driverless technology engineer Paul Godsmark from the Canadian Automated Vehicles Centre of Excellence (CAVCOE), as they tour Los Angeles, the entertainment capital of the world. The two travel to the future in a replica time machine from the Back to the Future movies to explore the future of driverless cars. 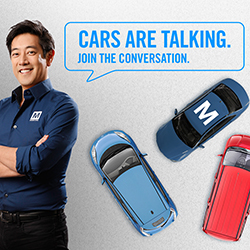 During their travels, they’ll discover the history of driverless cars, the ethics of autonomous vehicles, how automakers are adjusting for implementation, and the challenges faced in gaining the public’s acceptance of driverless cars.

“Moving to full-scale autonomous driving will have substantial economic, environmental and social impacts that will drastically change the way people live and conduct their everyday lives,” said Glenn Smith, Mouser Electronics’ President and CEO. “This new series is a great opportunity for the engineering community to experience first-hand the technology created and still needed for driverless cars to become a reality.”

“The autonomous car could have sweeping benefits for all of society – not just its owner,” said Grant Imahara. “Driverless cars have the potential to be so much more than just modern conveniences or consumer toys. Saving time, money and fuel are given, but consider that they could save countless lives by replacing distracted or fatigued drivers.”

Along the way, the video spotlight pulls in key visionaries from the industry to discuss the topic in further depth, and gives viewers additional insights to where the technology is headed and how autonomous driving will become a revolutionary change in the way we live and get around. The comprehensive series also will include accompanying articles, blogs, challenges and other related technical co