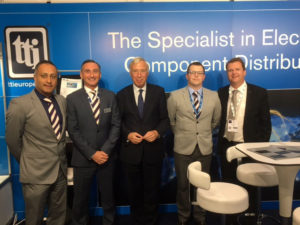 The Rt. Hon. the Earl Howe, Minister of State for Defence and Deputy Leader of the House of Lords, visited TTI’s stand at the world’s leading defence and security trade show, DSEI, held at the ExCel centre in London on September 12 – 15. TTI, Inc., a world leading specialist distributor of electronic components, is a regular exhibitor at DSEI, the defence sector being one of its most important markets globally.

The Rt. Hon. the Earl Howe, Frederick Curzon, was welcomed to the stand by TTI’s general manager, UK, Ireland and South Africa, Kevin Nicholls, who explained that the company specialises in supplying passive, connector, electromechanical, discrete, power and sensor components. TTI boasts a long and successful track record in the defence, aerospace & space sectors, selling more mil-spec and e-rel capacitors, resistors and connectors than any other distributor, having started in the USA as a supplier of resistors to military customers.

“It was an honour to have the Minister visit our stand,” comments Nicholls. “He was surprised and pleased to learn that TTI, part of the US Berkshire Hathaway group, is based in High Wycombe, where our UK offices have been located since 1992. We spoke about the UK operation’s contribution to the company both in terms of European sales and globally, plus the outlook for the industry, which is positive, with the latest estimates for world electronic equipment revenues showing growth in Q2’17 over the same quarter last year, and supply chain revenues also expected to be greater than last year.”