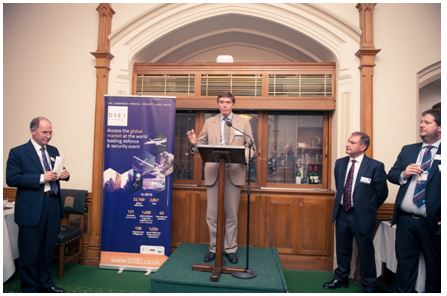 Philip Dunne MP, Minister of State for Defence Procurement, addressed MPs and members of the defence community at a parliamentary reception hosted by Jack Lopresti MP in support of Defence and Security Equipment International (DSEI) last Wednesday. Mr Dunne encouraged all MPs to talk to the defence industry and to visit the exhibition, as the UK is one of the world leaders in defence exports. The minister has also confirmed that he will be attending DSEI and delivering a keynote speech during the event, which takes place from 15th – 18th September at ExCeL, London.
Mr Dunne described the extensive remit of his role, which he has held since 2012, as “both the defence industry’s biggest customer and also its biggest supporter”. He stressed that with the Strategic Defence and Security Review (SDSR) underway and fresh causes of instability, such as Russian aggression, ISIS, and terror attacks in Paris, there is an increasing need for defence. He also lauded the UK defence industry for its wide-ranging, cutting-edge capabilities, and DSEI for providing a global platform to showcase them.
Other attendees at the DSEI reception included Dr Julian Lewis, Defence Select Committee Chair; Sir Gerald Howarth, MP for Aldershot; Vernon Coaker, Shadow Secretary of State for Defence, and Stephen Phipson, Head of UK Trade and Investment Defence and Security Organisation (UKTI DSO), as well as several new MPs interested in learning more about defence.
There will be strong support from UK Government and military at DSEI 2015, including the Secretary of State for Defence and four UK MOD service chiefs, who are confirmed to speak over the four days of the exhibition. DSEI is a world-leading defence and security event and is expected to welcome more than 1500 exhibitors and over 32,000 visitors from around 120 countries, including 150 delegations.
Share KAMIC Magnetics Group will present its strongest ever power magnetics portfolio at PCIM, and for …