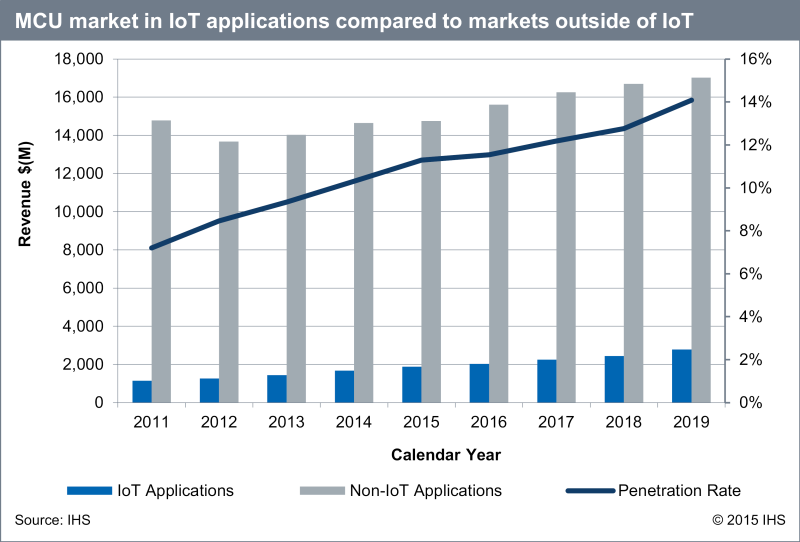 The market for microcontroller units (MCUs) used in Internet of things (IoT) applications is on the rise, which is having a positive effect on overall MCU market growth. The market for MCUs used in connected cars, wearable electronics, building automation and other IoT applications is expected to grow at an overall compound annual growth rate (CAGR) of 11 percent, from $1.7 billion in 2014 to $2.8 billion in 2019, according to IHS Inc. (NYSE: IHS), the leading global source of critical information and insight. The overall MCU market is expected to grow at a CAGR of just 4 percent through 2019.

“What some still consider to be only hype surrounding emerging IoT trends has already begun disrupting the MCU market,” said Tom Hackenberg, senior analyst for IHS Technology. “In fact, without the influence of IoT application growth, the MCU market is predicted to stagnate by the end of the decade.”

According to the latest Microcontroller Market Tracker from IHS Technology, IoT comprises both existing Internet-protocol- (IP-) addressable devices and Internet-connectable electronic devices. This definition differs from the Internet of everything (IoE), whereby even unconnected electronics and unconnected objects are expected to be represented on the Web.

IHS sub-divides the IoT market into three distinct categories: controllers, such as PCs and smartphones; infrastructure, such as routers and servers; and nodes, such as closed-circuit television (CCTV) cameras, traffic lights and appliances. “Each of these categories offers a distinct opportunity for suppliers of hardware, software and services,” Hackenberg said.

“The IoT trend has a strong relationship with the MCU market, as the small nodes used for connectivity, and sensor hubs to collect and log data, are primarily based on MCU platforms,” Hackenberg continued. “Most serious suppliers of MCUs are already closely following the hype around the billions of connected devices; however, the industry’s challenge now is to quantify this new opportunity, since IoT is a conceptual trend, not a device, application or even a new feature.”

“IoT is a sweeping term that addresses broad opportunities for hardware, software and services across many different applications,” Hackenberg said. “Suppliers must therefore focus on their target markets and concentrate on the specific values they bring to these markets.” The IHS Microcontroller Tracking Service now offers market size and forecast for the MCUs targeting IoT applications specifically in 25 distinct market opportunities.