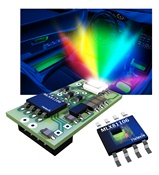 Melexis has introduced the MLX81106 – the industry’s first LIN RGB LED slave to be incorporated onto a single semiconductor die. Highly advanced, this freely-programmable IC looks to address the emergence of automotive LIN RGB ambient lighting systems and is capable of driving up to 4 LEDs directly thanks to its integrated constant current sources. Every output can be programmed to a maximum current of 35 mA through the built-in Flash memory.

The combination of up to 32 kByte Flash LIN controller and approved LIN driver together with directly controlled high voltage capable constant current outputs mean that LIN can be rapidly implemented into RGB ambient modules.The MLX81106’s high level of integration looks to dramatically reduce both the bill of materials (BoM) and board space utilization – and should help in the development of considerably smaller LIN RGB ambient light modules. It also includes the possibility for LIN auto-configuration and can thus be used for other applications requiring a low pin count fully integrated LIN slave.The LIN protocol handler meets all LIN standards including LIN2.x, as well as SAE J2602.

To support a high thermal performance by keeping the low cost target, MLX81106 is offered in a fused lead-frame SOIC8 package.

“The MLX81106represents the next generation of LIN RGB ASSP products” says Michael Bender, LIN product line manager at Melexis. “From an application perspective it merges state-of-the-art technology with maximum flexibility into a cost efficient package. The integrated functions deliver all the needed design freedom, while minimizing design time and qualification effort. It lowers risk and overall cost, but at the same time enhances system performance, so that LIN RGB suppliers will be able to catch the automotive ambient lighting LIN wave”