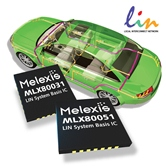 At a time when the local interconnect network (LIN) bus is seeing continued widespread adoption in the automotive world Melexis has unveiled the MLX80031 and MLX80051 enabling the development of LIN slaves in a simple and highly efficient manner. These ICs combine a physical layer LIN transceiver (according to LIN 2.x and SAEJ2602) with a voltage regulator (3.3V/70mA for the MLX80031 and 5V/70mA for the MLX80051).

Both of these new devices have an independent window watchdog which increases the system availability of the connected microcontroller. In addition they are pin-to-pin compatible with established LIN devices such as the ATA6622/28.

Produced using a 0.35µm HV-CMOS process technology, these transceivers have been optimised for minimal current consumption (drawing only 15µA in standby mode). Integrated standby management assures initiation of ‘wake up’ from the LIN bus itself or directly from a connected microcontroller or other external sources. By generating a RESET output signal they can minimize the external circuitry necessary for the microcontroller they are connected to. Via one external bipolar transistor the output current can be increased in case the internal regulator cannot support the current level needed for the specific application.

Both devices also have the capacity to meet the increased electro-magnetic compatibility (EMC) requirements for single wire bus systems as well as the “Hardware Requirements for LIN, CAN and Flexray Interfaces in Automotive Applications” defined by German car manufacturers.

For self-protection the ICs are equipped with integrated load current limitation and over temperature shutdown, as well as 40V load dump protection. In addition, the MLX80031 and MLX80051 achieve world-leading electro-static discharge (ESD) robustness of >20kV with direct discharge as well as >15KV with indirect discharge (complying with IEC61000-4-2). These devices are qualified in accordance with both AECQ100 and RoHS. Samples are available on request. Renesas Electronics Corporation, the supplier of advanced semiconductor solutions, has introduced the RX671 group of …