Back in the 1960s, animated sitcom The Jetsons depicted the car of the future as a levitating capsule that flew through the air to drop main character, George Jetson, at the office before folding up into his briefcase. While flying cars are still out of reach, the adoption of cloud computing in automotive manufacturing is helping create a new car of the future. Here Jonathan Wilkins, marketing director of obsolete parts supplier, EU Automation discusses the increasing use of cloud computing and mobile devices in automotive manufacturing.

Designers, engineers, supply chain experts and production organisations all collaborate in the first stages of automotive manufacturing to ensure the final product functions well, is appealing to its target market and will not become a victim of obsolescence. Traditionally, having so many parties involved would mean the design was passed from pillar to post before completion, but cloud-based platforms allow these cross-functional teams to work on new designs in real-time, sharing information to speed up innovation. 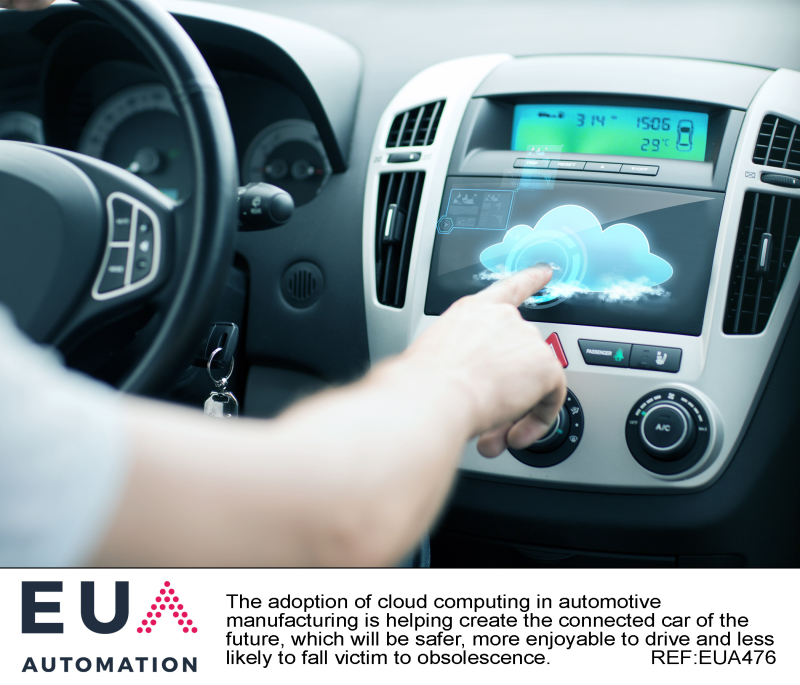 The automotive industry already has one of the most complex supply chains in manufacturing, but the popularity of the connected vehicle is expected to increase rapidly over the next few years. This will make the supply chain yet more complex and pave the way for analytics, mobile and social technologies.

A connected vehicle is equipped with internet access and, usually, a wireless local area network. This allows the vehicle’s onboard technology to communicate, as well as sharing information with devices outside the vehicle. This technology offers benefits to the driver, including automatic notification of crashes, notification of speeding and safety alerts.

A connected vehicle can also make each journey much more enjoyable for the driver, as they often have integrated voice command software, hands-free controls and an extensive entertainment system, usually connected to a smart phone.

Future automotive technologies and connected vehicle features, such as location-based services and urban-area wireless traffic networks, increase the need for additional onboard components including sensors, embedded software and integrated networking. Some manufacturers will have little experience dealing with such mechanisms, so collaboration with component manufacturers is vital.

Often, component manufacturers can be scattered across the globe. When different design parties in various time zones are making changes to the original design, modifications can often be missed causing problems further down the line. A cloud-based design system sends contributors a notification when changes are made to the design, keeping all parties in the loop.

Automotive manufacturers were the first to pioneer the concept of digital twinning, in which the design of a car will exist virtually as well as in reality. But it doesn’t stop at the car itself, there can also be a digital twin of the manufacturing environment, replicating the minutiae and detail of production, including the make and model of the motors, drive and PLCs used in the process.

‘The Digital Twin represents all of the digital information collected about that specific physical asset—we collect its history, the conditions under which it has been used, its configuration, who has touched it to repair it and more. The idea is to optimise analytics and maximise the life of the individual asset, optimise its performance, and optimise a set of assets across a fleet,’ explained Arnold Lund, PhD, computational and industrial experience labs technology leader at GE in a whitepaper entitled Advanced Manufacturing’s Impact on the Global Economy.

The complex supply chain I mentioned earlier can also be replicated, with a virtual twin of the manufacturing plant used by each supplier in the tiering system also being created. The manufacturer and the other companies that make up the team can then validate this virtual environment. As a result, in the event of a breakdown, it is often easier to make like for like replacements of components, such as robots, conveyors and drives, than it is to replace the damaged parts with new systems, which in turn need to be re-validated.

In the automotive industry, there is no room for mistakes. Manufacturers need to ensure that, when the final product leaves their facility, it is ready to be used and nothing will go wrong. Using cloud-based software during the manufacturing phase ensures changes are tracked and final component tests can be easily logged and managed before being used in the final product.

While the connected car of the future might not be able to fly, and certainly won’t fold up into a briefcase, it will be safer, more enjoyable to drive and less likely to fall victim to obsolescence. However, unless automotive manufacturers embrace the cloud now, they risk losing out to more tech-savvy competitors. As George Jetson’s boss, Mr Spacely once said, ‘lost time means lost money’.