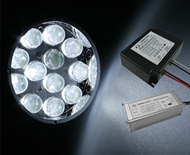 The constant-current LED driver modules include 40W types for indoor lighting applications, and 40W, 50W, 75W, 100W and 120W output for street or tunnel lighting applications. The devices offer power efficiencies of 90%, built-in active PFC, IP66/67 ratings, and operate over a wide range of input voltages from 90V up to approximately 305V, making them suitable for use in the majority of countries in the world. In addition, the Shinelight range includes high-efficiency dimmable LED drivers including power ratings from 25 to 200W and high-efficiency DC-input LED driver modules from 20 up to 150W.

Shinelight Technology was founded in January 2007 in Hangzhou, China, and is a specialist in power supply and LED lighting applications. Shinelight was certified to ISO9001:2000 in 2011.

“LED technology is advancing fast and making a significant impact in lighting markets in indoor applications such as in retail and in the home, and outdoor lighting such as street and architectural usage”, said Andy Eden, Product Marketing Manager at Luso Electronics Distribution. “These high-efficiency LED driver power supplies from Shinelight are an excellent complement to the Luso power portfolio”.