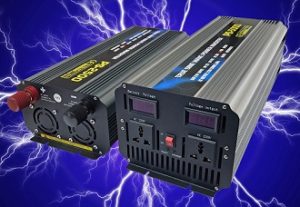 Leading power supply specialist Powersolve announces its new PS series of 1000 to 5000VA DC-AC inverters. These are low cost, pure sine wave output DC-AC inverters available from Powersolve with inputs of either 12V, 24V or 48VDC. Customers can order an AC output of either 220VAC or 230VAC at 50Hz or 60Hz.

According to Powersolve, PS units are highly efficient, have a high surge rating and a low stand-by current. They incorporate an LCD display to indicate input DC voltage and output AC voltage while LED indicators show the unit’s operative status.

Powersolve can supply these with a universal output AC socket or a country specific output socket (UK, European, Australia/New Zealand) which must be specified when ordered. The 4000VA and 5000VA PS Series units have output screw terminals.

PS Series DC-AC inverters are designed to shut down in the event of overload, over temperature or short circuit where users are alerted by audible alarms. Powersolve can also incorporate an optional facility for remote control.

All versions are housed in a fan cooled anodized aluminium enclosure. The Powersolve PS series meets all relevant safety and EMC standards.

Since it was established in 1987, Powersolve has supplied millions of power conversion products such as AC/DC power supplies, DC/DC converters, DC/AC inverters, Battery Chargers, Batteries, Uninterruptible Power Supplies and many other products.

Based in Newbury, Berkshire, Powersolve is recognized as one of Europe’s foremost power specialists working with customers to provide the best power solution for their application. The company provides major customers in the electronics industry, communications, datacoms, telecoms, industrial, oil and gas – in fact most types of industry where there is the need for power and power conversion products. In particular, Powersolve has a lot of experience with lithium batteries and lithium battery chargers for the communication industry particularly in encrypted radio systems where Powersolve has supplied many millions of pounds worth of intelligent battery chargers used in radio communication equipment for the emergency services.