The 13th Innovation and Entrepreneurship in Robotics and Automation Award (IERA) was presented to the Relay butler robot. Made by Savioke, an American company, the little robot completes deliveries all on its own, for example in hotels, hospitals or logistics centres. Thanks to artificial intelligence and sensor technology, Relay can move safely through public spaces and navigate around people and obstacles as necessary.

“The IERA Award is one of the most important distinctions in the world of robotics today,” said Joe Gemma, president of the International Federation of Robotics (IFR). “This year”s award winner, Relay, perfectly exemplifies how research and development can successfully work hand in hand with industry.” The International Federation of Robotics (IFR) and the IEEE Robotics and Automation Society (IEEE/RAS) jointly sponsor the annual IERA award.

“This year once again, we received a large number of truly exceptional applications,” said Erwin Prassler, vice president of the IEEE-RAS. “In the end, the jury was unanimous in its decision. 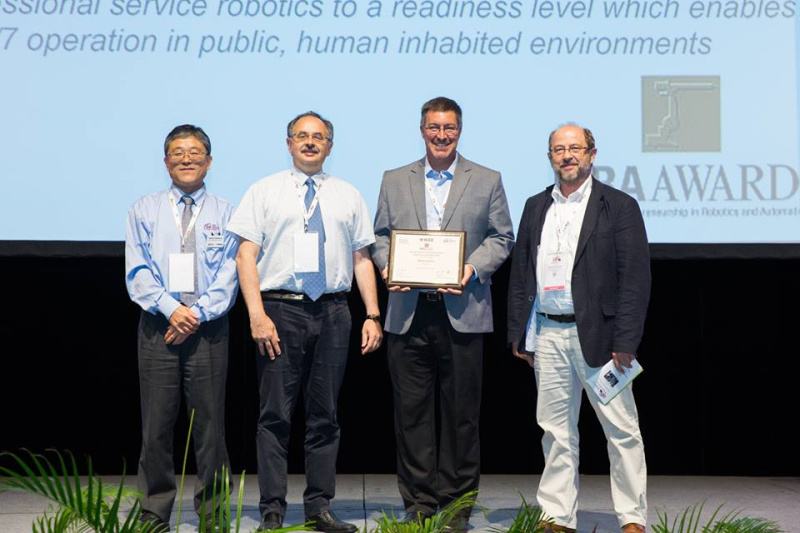 This award is a testament to the excellent work by California-based Savioke led by its CEO, Steve Cousins. Steve Cousins and Savioke have developed the core technology in professional service robotics to a readiness level which enables a 24/7 operation in public, human inhabited environments.”

“Relay is the first fully autonomous delivery robot worldwide that is able to navigate safely through human-occupied spaces,” said Steve Cousins, CEO of Savioke. “Up until now, similar technologies have been limited to fixed routes, or deployed only in closely defined spaces. Our highest aim is always to create robots that can help people. The interaction should be as friendly and pleasant as possible.”

The Relay robot is barely three feet tall, with a slender 18-inch torso. It communicates with its surroundings via touchscreen, smart phone and sounds. Additionally, the robot is equipped with friendly, easy to understand facial expressions. A transport compartment is located at the top of the robot. The Relay robot can activate elevators on its own while delivering, making it well suited for performing deliveries in building complexes such as offices, hospitals or hotels. The ‘botler’ can deliver drinks, medication or towels, just like a human butler. When the job is done, Relay returns automatically to its docking station.

The first Relay models were deployed three years ago in the hotel industry. The second stage of deployment was in apartment and industrial buildings. Savioke robots have already completed over 100,000 deliveries in the United States, Asia and the Middle East. Relay is slated to come to Germany and France in the near future.

The IERA Award 2017 winners were selected by a jury comprised of high-ranking IFR and IEEE-RAS members. A total of four finalists were recognised this year for their innovative solutions. The other three finalists were: