Leti, a research institute of CEA Tech, has announced it has taken a major step toward development of next-generation magnetoencephalography (MEG) that could significantly reduce the cost of MEG systems and scans, improve diagnosis and treatment for epilepsy patients and help guide surgeons performing brain surgery.

MEG is an imaging technique that measures brain functioning based on magnetic fields produced by the brain’s electrical activity. It enables localisation of electrical signals, coming from neural activity, with an increased spatial resolution. It is typically used to localise epileptiform brain activity, originating from the epileptic brain network, prior to surgical intervention. 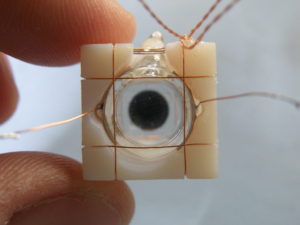 Current MEG systems are cooled cryogenically, a process that requires periodic refilling of liquids. The maintenance-free Leti device operates at room temperature, eliminating the need for cryogenic cooling and reducing the size and weight of the device’s magnetic shield from 5,000 kilograms to 150 kilograms.

For this advanced application, Leti refined its space quantum sensor, a device used in European Space Agency missions, to achieve performance superior to current MEG systems at a cost five times lower. In addition, Leti’s sensors can provide more information on brain activity due to their vectorial nature, improving localisation of epileptic foci.

The quantum sensor is an optical pumping magnetometer with improved sensitivity thanks to the use of low-noise laser source and the selection of magnetic resonance optimised for measurement of very low magnetic fields. The laser can sense the movement of 100 billion atoms acting like small magnets whose behaviour is directly linked to the magnetic field. It is an essential block of the high-performance sensor.

The system recently won the Best Early Stage Innovation Award from the European Commission in the gateone-project, one of the EC’s Horizon 2020 programs to support development of smart technologies by European SMEs. The MEG project was coordinated by BLUMORPHO, a Paris-based innovation accelerator.

“To develop this disruptive system, Leti’s team developed sensors that can lower the cost of MEG scans by at least a factor of five,” said Regis Hamelin, BLUMORPHO CTO, and Matthieu le Prado, group leader at Leti. “This new generation of MEG equipment will deliver dramatically improved visualisation of brain activity to support neuromedicine’s evolution to non-invasive surgery and regenerative medicine.”

This new MEG system will be a flexible helmet that conforms to the heads of adults and children. In addition to improving diagnosis, it will increase patients’ access to neurosurgery, beginning with those with epilepsy, which affects 6 million people in Europe.