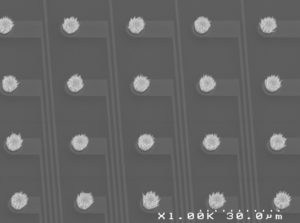 Leti has announced that the European R&D project known as PiezoMAT has developed a pressure-based fingerprint sensor that enables resolution more than twice as high as currently required by the U.S. Federal Bureau of Investigation (FBI).

The project’s proof of concept demonstrates that a matrix of interconnected piezoelectric zinc-oxide (ZnO) nanowires grown on silicon can reconstruct the smallest features of human fingerprints at 1,000 dots per inch (DPI).

“The pressure-based fingerprint sensor derived from the integration of piezo-electric ZnO nanowires grown on silicon opens the path to ultra-high resolution fingerprint sensors, which will be able to reach resolution much higher than 1,000 DPI,” said Antoine Viana, Leti’s project manager. “This technology holds promise for significant improvement in both security and identification applications.”

The eight-member project team of European companies, universities and research institutes fabricated a demonstrator embedding a silicon chip with 250 pixels, and its associated electronics for signal collection and post-processing. The chip was designed to demonstrate the concept and the major technological achievements, not the maximum potential nanowire integration density. Long-term development will pursue full electronics integration for optimal sensor resolution.

The project also provided valuable experience and know-how in several key areas, such as optimisation of seed-layer processing, localised growth of well-oriented ZnO nanowires on silicon substrates, mathematical modeling of complex charge generation, and synthesis of new polymers for encapsulation. The research and deliverables of the project have been presented in scientific journals and at conferences, including Eurosensors 2016 in Budapest.

The 44-month, €2.9 million PiezoMAT (PIEZOelectric nanowire MATrices) research project was funded by the European Commission in the Seventh Framework Program. Its partners include: