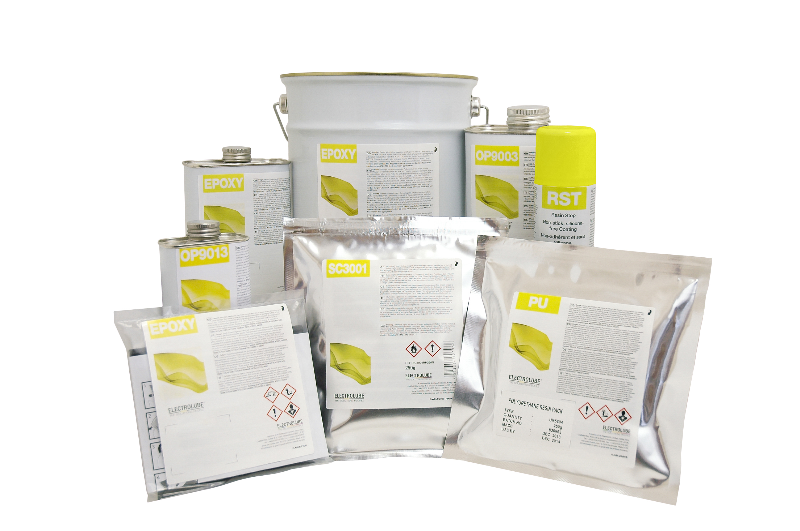 Electro-chemicals specialist, Electrolube has selected the Southern Manufacturing event to showcase the company’s latest new products and provide an exclusive first look at a groundbreaking new contamination removal product that is set to become the de facto standard for electronics manufacturers.  The newest breakthrough product from Electrolube will be officially announced during the event on stand L8 at the Southern Manufacturing show, which takes place at FIVE, Farnborough from the 10th to the 12th February 2015.

New products being highlighted at the show also include two new protective and decorative polyurethane resins that will be of particular interest to LED lighting manufacturers.

The first of these – UR5634 – is a two-part, semi-rigid, optically clear polyurethane resin that achieves a water-white transparency, ideal for LED potting applications. This RoHS-2 compliant, low-hazard, isophorone diisocyanate-free material is weather resistant, as well as being impervious to acids and alkalis. It is also strongly resistant to yellowing when exposed to UV light – of particular benefit to LED luminaires and light fixings exposed to direct sunlight.

Another two-part, semi-rigid polyurethane resin – UR5635 – will also be shown. Similar to UR5634, however, this produces a ‘hazy/cloudy’ finish that is ideal for creating a warm, diffused lighting effect when used as a potting agent for LED installations. Instead of incurring additional costs for plastic light diffusing mouldings, manufacturers of LED luminaires can make use of UR5635’s properties to achieve the same effect, while also providing maximum protection for the LED elements.

Like UR5634, UR5635 is a RoHS-2 compliant, low-hazard, isophorone diisocyanate-free material that is also UV and weather resistant, as well as being impervious to acids and alkalis.

The company will also present its AFA aromatic-free acrylic conformal coating for the protection of electronic circuits. Formulated without the use of hazardous aromatic solvents such as Toluene and Xylene, it is UL746-QMJU2 compliant, achieves flame retardancy to UL94 V-0, and meets IPC-CC-830 and MIL-1-46058C approvals. AFA is ideal for those applications requiring rework, being easily removed using Electrolube’s ULS cleaning solvents.