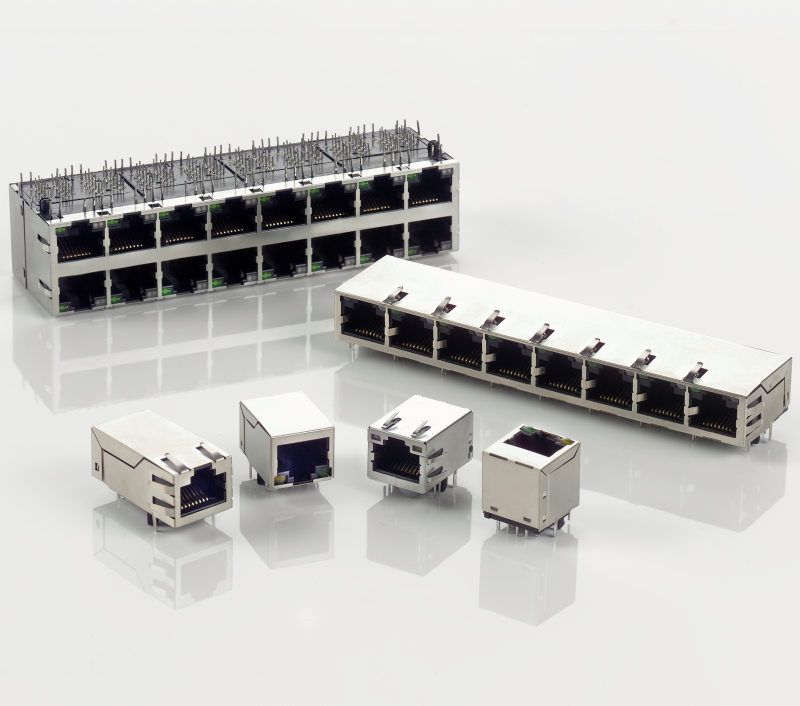 Connector specialist EDAC has extended its family of connectors for telecom, networking and entertainment applications with the addition of a range of magnetic jack connectors that integrate up to ten of the most sensitive discrete components inside a shielded RJ45 housing.

Mainly targeting 10/100 Base T and 1000 Base T gigabit Ethernet applications the three device families in EDAC’s edacJAX range of modular and magnetic jack connectors offer single and stacked multiport options and LED indicators that provide visual indication of port status and system activity. USB or HDMI connections can be incorporated in the industry standard sized housing. Rapid Electronics will be the first distributor to stock the new edacJAX connector range in the UK.

edacJAX Series A00 modular jack connectors offer outstanding performance in high-speed networking, voice and datacom applications. The devices are available ganged or stacked for multiport requirements and feature advanced EMI/RFI shielding within industry standard dimensions. A low-profile option is available. The devices can be fully or partially loaded and are fully compliant with FCC Part 68, Subpart F requirements.

Combining the functionality of edacJAX Series A00 devices with the signalling capabilities offered by integrated LED indicators, edacJAX Series A20 modular connectors are available with a single LED with matching lens or as a bi-coloured variant that utilises a clear lens to enable the colour of the LED to be changed by simply reversing the voltage polarity.

Available in a choice of dual stack and multiport options edacJAX Series A60 magnetic jack connectors target 10/100 Base T and 1000 BaseT gigabit Ethernet applications and are available with or without POE/VOiP capability. Fully IEEE 802.3 compliant these devices feature spring-loaded ‘fingers’ to ensure maximum resistance to electromagnetic interference (EMI) and can be ordered in tab-up and tab-down configurations to maximise design convenience  and compatibility with peripheral equipment.

According to Nathan Ashford, European distribution manager with EDAC (Europe), a shortage of board real-estate often precludes the use of individual components in modern 10/100 Base T and 1000Base T gigabit Ethernet applications, compelling the use of a high-performance, highly reliable integrated I/O interconnect solution: “EDAC’s edacJAX magnetic jack connectors are able to integrate an impedance matching transformer, LED indicators, a high-voltage capacitor and a common mode chokes inside a standard sized RJ45 connector,” Ashford said. “In addition to reducing manufacturing inventory and boosting system reliability our edacJAX magnetic jack connectors deliver a valuable reduction in system noise – EMI, RFI, crosstalk and jitter – due to the reduction in the number of exposed components on the board.”

Janice Ratcliffe, E-Mech product manager at distributor Rapid Electronics, said she was delighted to be UK’s first distributor of the edacJAX Series A00, A20 and A60 modular and magnetic jack connectors: “It is exciting to be part of the new distribution strategy from EDAC and my team and I look forward to extending our partnership with a number of other innovative products in the EDAC range.”