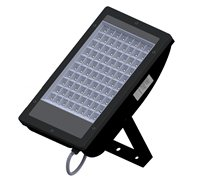 According to Marl International its latest LED floodlight produces 50% more light than the previous model for the same power. Their high efficiency of over 80 lumens / Watt means that they qualify for an Enhanced Capital Allowance (ECA) claim and have a payback of less than two years based on energy savings alone.

The new version of the Marl 748 series draws just 60W but can be used to replace a 500W linear halogen lamp, using 88% less energy to produce the same light output. It can also replace a 100W metal halide lamp. The 748 series also delivers considerable maintenance cost savings, with its long rated life of 60,000 hours, equivalent to over 13 years at 12 hours per day. In this time, a halogen floodlight would need to be replaced 30 times, based on a standard life of 2,000 hours. Marl is offering a five-year guarantee on the light.

Commenting, Adrian Rawlinson, Managing Director of Marl said, “Given that replacing a floodlight normally requires the hire and use of an access platform, Marl LED floodlights can be justified financially on the reduction in maintenance costs alone. On top of that, they use significantly less electrical energy.”

Designed and manufactured in the UK, the Marl 748 series floodlight is just 10cm deep, but can deliver nearly 5000 lumens from an input power of just 60W. The floodlights are packaged in a robust die-cast, powder coated aluminium housing protected by tempered glass. The units are weather-proof, being sealed to IP66 standard, and are suitable for operation between -30°C and +45°C.

Marl has designed the floodlights in accordance with world-wide electrical safety standards. It weighs just 8.1kg. New for Autumn 2021, the curved displays from AUO are available now at Display Technology. …