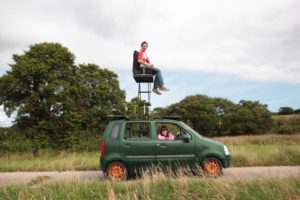 Back in July, RS Components announced that they were sponsoring the vlog channel, ‘Kids Invent Stuff’, a YouTube channel where children, aged five to 11 years old get the chance to have their ideas or inventions made real by engineers.

At the beginning of the August, ‘Kids Invent Stuff’ picked nine-year-old Connor’s invention idea to bring to life for their In-Car Entertainment Challenge. They asked kids around the world for their ideas for inventions to make long car journeys more fun. 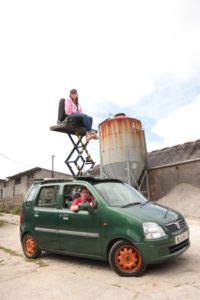 “This month’s build is the biggest we have undertaken yet and we were really lucky that a Sheffield-based engineering firm – Gripple Ltd – were able to support some of our additional build costs,” says a representative from the YouTube channel. “The three main components for our build were a car, a scissor lift and a car seat. It might sound like a simple build, but with a 300kg scissor lift and a compact hatchback as our vehicle, we knew we were in for a challenge.

“One of the first things we had to do after buying a little green Vauxhall Agila, was to block the suspension so our 2.5-metre tall scissor lift didn’t make the car move too much and topple over when a person was sat on the top. We also needed to do some serious work to the car and the scissor lift – so that the lift would fit in the back of the car and could extend out through the roof. RS Components kindly sent us a 230mm angle grinder which got a lot of use on this build, as did our RS Pro socket and spanner kit.”

Watch the video below to see how they got on with the build: 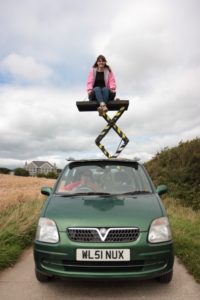 After a successful build, the next step is to test it.

‘Kids Invent Stuff’ said: “The car was a lot of fun to test and definitely succeeded in making our journey more exciting.

“So sit back and imagine the nearest beach resort is a five-hour drive away; the sun is high in the sky, the motorway is busy and the car is hot and sweaty. Everyone’s getting bored and the kids need something – anything – to relieve their boredom.

“Enter Connor’s crazy car seat contraption, a simple but effective in-car entertainment device to inject a thrill into your holiday commute. At the push of a button you’ll feel the wind in your hair and the bugs in your teeth, enjoying the view from the roof of your car; watching the scenery shoot by, waving at truckers and screaming because you want to go faster. Because who wants to ride inside the car when you can ride two metres above it!”

Watch the the test video here: