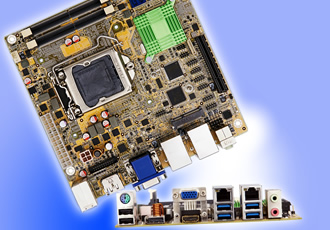 BVM Limited”s range of Mini-ITX motherboards has increased with the addition of the KINO-AQ170. It supports Intel’s 6th generation Skylake 14nm Core i7/i5/3, Pentium and Celeron processors, which offer enhanced performance at the lowest power levels ever, delivering up to two and a half times better computing performance than previous generations, according to the company.

The KINO-AQ170 is useful as the engine for graphics rich and computing-intensive environments such as gaming, surveillance, medical, defence, signage, transportation and industrial automation. Running under the Q170 Chipset, up to 64GB of 2,133MHz DDR4 SRAM can be accommodated. Intel HD Graphics Gen 9 supports extensive interfaces and decode/encode functionality.