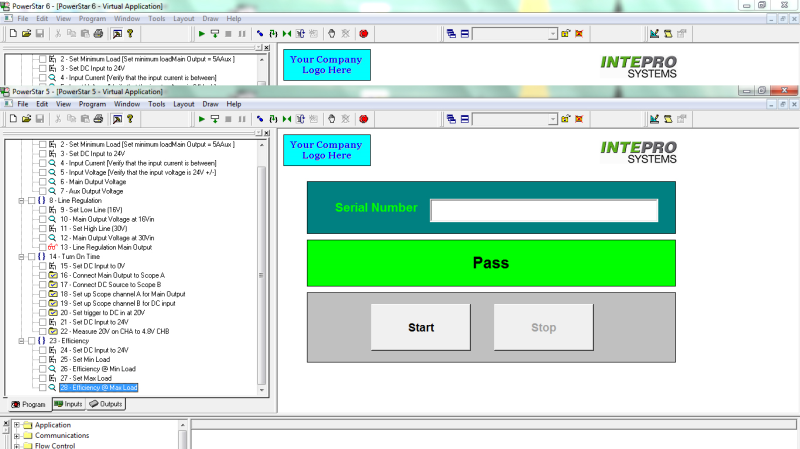 INTEPRO SYSTEMS has launched the latest version of its very successful PowerStar test software, PowerStar 6. PowerStar 6 includes a number of new features designed to make testing even easier including an expanded test library that allows users to “program without coding” Using a simple drag and drop method to create a test program with the convenience and ease of fill-in-the-blank test screens. PowerStar 6 will now operate with high speed 64 Bit processors and is available as a stand-alone product in three different tiers; Silver, Gold, and Platinum.

Intepro’s “program without coding” makes use of the comprehensive test library built-in to PowerStar 6. The library allows for instrument set-up and device under test (DUT) output test parameters to be defined using this easy to use drag and drop menu from the library into the test program sequence. Test screen data is entered with numbers or with the use of variables to provide great flexibility in the test execution. In addition, defining inputs and output separates the test hardware from the test code making PowerStar 6 hardware independent, allowing customers to execute the same test program on different system configurations.

PowerStar 6 extends many of the PowerStar 5 features that are popular with its customers.  PowerStar 6 is compatible with Windows XP, Windows 7 and 8 in both 32 and 64 bit. It is also compatible with the trial version of Windows 10. PowerStar 6 has an expanded test library including new AC Loads, DC loads, high power AC sources, scanners, measurement devices and various instrument communication busses including I2C, SPI, RS232, TTL Serial, 1553, Mod Bus, and CAN. Enhancements include more options for data logging. While PowerStar 5 was limited to Microsoft Access or SQL data types, PowerStar 6 offers the addition of XML/ATML compatible files. PowerStar 6 can also export results to Microsoft Excel CSV files. PowerStar 6 provides report templates in XSL and are definable at a global or individual program level. These templates include test report, failure report, pass slip, and fail slip. They also let saved scope plots to be included in the report templates.  PowerStar also has a report generator so users can create custom templates, reports and analysis.

PowerStar 6 is available in three versions – Silver, the most basic version, Gold, and Platinum. Silver is designed for small tests, Gold is for medium sized systems, and Platinum for large test systems which also includes MS Visual Studio. Delivery is immediate.