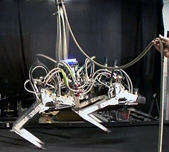 The use of ground robots in military explosive-ordinance-disposal missions has saved many lives and prevents thousands of other casualties.  According to DARPA the current limitations on mobility and manipulation capabilities of robots can be overcome, and as a result robots could more effectively assist warfighters across a greater range of missions.

The agency – which is run by the Pentagon – funded the Massachusetts robotics company Boston Dynamics to build the machine.

The robot”s movements have been modelled on wild fast-running animals and the machine can flex and un-flex its back to increase the length of its stride. While the current version is dependent on an off-board hydraulic pump, researchers said a free-running prototype was planned for later this year.

The project which was commissioned in February 2011, aims to deliver a robot which can “zigzag to chase and evade”, and be able to come to an abrupt halt.

The M3 program is focused on four parallel tracks of research and development: tool design, improvement of production methods and processes, improvement in control of robot mobility and manipulation, and prototype demonstration. Farnell, an Avnet Company and global distributor of electronic components, products and solutions, has announced …