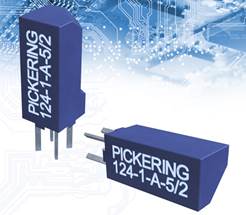 Pickering Electronics, the reed relay company which has pioneered miniaturisation and high performance for over 50 years, will show industry’s smallest reed relay at the upcoming Engineering Design Show, Ricoh Arena, Coventry, 17-18 October. The Series 124 is part of Pickering’s new ultra-high density 4mm2reed relay range product line, which takes up the minimum board area of only 4mm x 4mm, allowing the highest packing density possible. Series 124 relays are also the lowest profile on the 4 x 4mm footprint, measuring just 9.5mm high. Devices are currently available in 1 Form A (energise to make) with options of 3 or 5 volt coils. 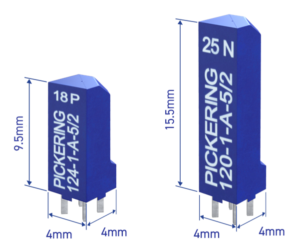 Series 124 reed relays feature a sputtered ruthenium switch rated at 5 watts, 0.5 amps. These are the same reed switches as used in the long-established Pickering Series 111, 111P and 117 but are orientated vertically within the package, facilitating such high density.

The relays boast very fast operate times, typically 80µs, making them ideal for high speed test systems, and due to the incredibly small size they are also suitable for very high-density applications such as A.T.E. and Semiconductor switching matrices or multiplexers.

These single pole relays are the second series to be launched within Pickering’s new ultra-high-density product line – Series 120 devices were released at Semicon West last year, rated up to a 1.0 Amp at 20 Watts, but with a higher profile height of 15.5mm. Battery care when forklift fleets get back to work Nottingham-based start-up, Search For The Next (SFN) has announced that its Bizen® transistor technology has …